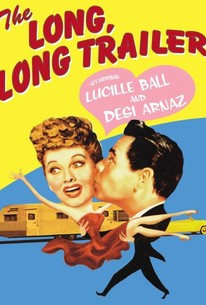 At the height of their TV fame, Lucille Ball and Desi Arnaz were contracted by MGM to make two theatrical films. The first of these, The Long, Long Trailer, stars Lucy and Desi as an upwardly mobile couple who decide to buy a trailer so they can live together while his job takes him around the country. Thanks to their naivete in such matters, they end up with a huge, bulky RV that costs five times what they planned. Their "seeing America" trip turns out to be a slapstick disaster, topped by Lucy's foolish decision to hide a heavy rock collection in the trailer; as Desi tries to maneuver a treacherous mountain road, the weighted-down home-on-wheels nearly loses its balance and almost tumbles off a cliff. The story is told in flashback, as Desi 'splains the breakup of his marriage to a motel court manager. Happily, Lucy shows up, goes "Waaaaah" a little, and all is forgiven. Despite the fact that audiences were getting Ball and Arnaz for free each week on television, The Long, Long Trailer was a big hit at the box-office. The film was adapted by Albert Hackett and Frances Goodrich from a novel by Clinton Twiss, with uncredited assistance from the I Love Lucy writing staff.

Norman Leavitt
as Driver
View All

[A] frenetic and intricate comedy...

The comedy [is] a hit. Unlike television sets of the day, film provided color and the chance to see Lucy's dynamic red hair.

Strange, surreal film, notable for Minnelli's brilliant use of color and visual style.

One of Minnelli's few broad comedies, more of a collection of anecdotes than a coherent tale, about the wacky misadventures of a middle-class couple (Lucille Ball and Dazi Arnaz) during a long cross-country trek.

...not even Minnelli and Berman could do much with a predictably inane script.

The ordinarily graceful Minnelli tries his best to guide this material and he finally gets his momentum in a climactic sequence... But until then, it's a largely unfunny TV sitcom romp.

A disaster for anyone but "I Love Lucy" fans.

This movie is funny for the most part, but some of the jokes (like the title suggests) go too long, so they're not that funny. The story is also predictable, but it's cool to see a movie with Lucy and Ricky.

As a huge "I Love Lucy" fan, I found that this movie didn't live up to their chemistry in the show. It was funny and a cute movie, but in comparison, the show is hard to beat!