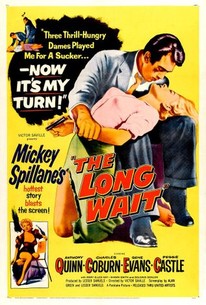 In this drama, based on a story by Mickey Spillane, an amnesiac is accused of murder and bank robbery. He lost his memory, and his fingerprints in a terrible car crash. Though he stands accused, the police cannot arrest him because there is no hard evidence. This does not stop them from continuing to look. At the same time, the innocent hero, also begins investigating. Along the way, he gets on a gangster's bad side and finds himself marked fore a hit. Soon the hero finds out that the bank job was helmed by the bank president who is in cahoots with the gangster.

Anthony Quinn does as well as possible in the "hero'' role, but the plot is fantastically involved and the odd camera angles are often more arty than Pollui.

There are no featured reviews for Long Wait at this time.