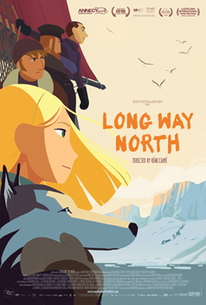 LONG WAY NORTH is set in the late 19th century Saint Petersburg. Sacha, a young girl from the Russian aristocracy, dreams of the Great North and anguishes over the fate of her grandfather, Oloukine, a renowned scientist and Arctic explorer who has yet to return from his latest expedition to conquer the North Pole. Sacha has always been fascinated by the adventurous life of her grandfather and has the same calling as Oloukine to be an explorer. But Sacha's parents, who already made arrangements for her marriage, strongly disapprove the idea to say the least. Defying her destiny, Sacha flees her home and launches an adventure-filled quest toward the Great North in search of Oloukine and his ship.

On DVD This Week: Ouija: Origin of Evil, The Girl on the Train, Train to Busan, and More
Golden Tomato Awards: Best Movies/TV of 2016
Miss Peregrine’s Home for Peculiar Children Is Imaginative but Messy

All in all, Long Way North is an ocularly gratifying film with a feminist message that is easy to embrace.

Smart, exciting, and sharply characterized, this French-Danish animation is family entertainment of the highest order.

The beautifully animated Long Way North has an attention to detail visually that evens out some clichés, making it a must-watch for families with young girls.

The lovely Long Way North is an old-fashioned animated movie, but don't let its unfussy execution fool you.

Beautifully animated with a delightful paper cutout and oil-crayon look that delicately conjures up ice, snow and fog.

What it lacks in invention and tension, it makes up in painterly beauty and a kind of tough sweetness that is never in danger of spoiling into sentimentality.

Suitable for children, the movie is certainly different in terms of its subject matter from your standard-issue animated work.

We need independent visually unique voices in animation so I hope you will seek out films like Long Way North and give them your support.

Feels like a wise palette cleanser from a bygone era that reminds us how to lead a fulfilling life.

It's promising, but the animation is simple, the British voice cast under-powered, and neither penicillin nor modern CPR surely have any part in a story set in 1882.

There are no featured audience reviews yet. Click the link below to see what others say about Long Way North (Tout en haut du monde)!