I lunghi capelli della morte (The Long Hair of Death) (1964) 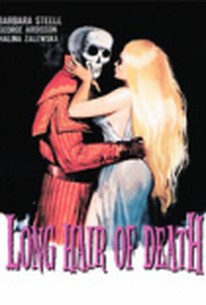 In the 15th century, a young woman is accused of being a witch and committing a murder. She is burned at the stake. Years later, during a plague, she is revived by lightning. She returns to her village to prevent her daughter from marrying the man who actually committed the murder for which she was executed. ~ Brian Gusse, Rovi

... a minor beauty of the genre, a medieval revenge film with an innocent burned for witchcraft, a corrupt aristocracy, a curse, a ghost, and a sweet, sweet revenge.

Helped slightly by the presence of 'scream queen' Barbara Steele in a dual role.

A great tale of ghostly revenge and corrupt kings, starring my favourite horror actress: Barbara Steele. I really like this movie.