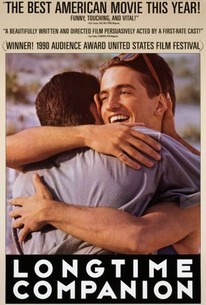 Critics Consensus: Longtime Companion is a sensitive ensemble AIDS drama, lensed with sympathy which builds to a moving finale.

Critic Consensus: Longtime Companion is a sensitive ensemble AIDS drama, lensed with sympathy which builds to a moving finale.

One of the first films to offer a thoughtful treatment of the AIDS epidemic and its effects on the gay community, Longtime Companion was directed by Norman Rene, who would die of AIDS himself in 1996. The ensemble drama is told through a series of vignettes that begins with the first New York Times report on the mysterious "cancer" that had resulted in the deaths of a growing number of homosexual men and ends eight years later, after the disease has thoroughly and devastatingly affected the movie's close-knit core group of characters.

Dan Butler
as Walter
View All

Longtime Companion is about friendship and loyalty about finding the courage to be helpful and the humility to be helped.

It was the first major film to deal with the AIDS epidemic and remains a forceful and passionate look at a group of friends supporting each other as they battle the virus.

Longtime Companion confronts [our] pain and gives us hope by showing us how strong we are as individuals and as a group.

The film unfortunately tells its stories too well, ghettoizing them to a narrative that remains oblivious to its own historical groundwork.

Typically, we enter a scene a moment too early and leave it a moment too late, while the camera lingers over-long on faces expressing the obvious emotion.

One of the better hetero-friendly movies about gays.

Bearing the burden of being the first film about AIDS, Longtime Companion (which premiered at Sundance Fest) had the task of placing the crisis on the national agenda, which meant a gentler, kinder tone; even so, it's a touching, nicely acted feature

Formally unadventurous, a little PBS-y, but undeniably moving as it evolves.

A touching story, a bit preachy, but daring for its time.

Good, but not as good as Parting Glances

A sensitive film that helps us understand the bravery and gallantry of those who have been forced in the prime of life to confront death and grief.

Its surprising. It was made before Philadelphia, focuses on characters that are almost entirely gay men, it covers the entirety of the 1980s, offers a very honest portrait of the AIDS crisis, is a better movie, but Philadelphia is heralded as the definitive film about this subject. This film may move a little too fast but it isn't cheesy or award hungry like Philadelphia. It has a great cast and its well made. Deserves way more attention than it gets.

touching and groundbreaking film, great ensemble acting. you feel these people could be friends. early showcase for mary louise parker and campbell scott.