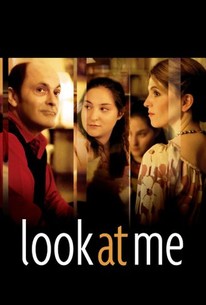 Critics Consensus: An observant drama-comedy about self absorption.

Critics Consensus: An observant drama-comedy about self absorption.

Critic Consensus: An observant drama-comedy about self absorption.

Look at Me Photos

A talented woman struggles to get out from under the shadow of her father in this comedy. Lolita (Marilou Berry) is the 20-year-old daughter of Étienne Cassard (Jean-Pierre Bacri), a wealthy and well-known editor and writer, and most of the people she meets seem to be more interested in her dad than in her; her zaftig figure doesn't help her self-esteem much, either. Lolita is a gifted singer and has been studying with a voice coach, Sylvia (Agnès Jaoui); however, as it turns out, Sylvia has a husband, Pierre (Laurent Grévill), who is a novelist and hopes that Cassard might be willing to help him get his new book into print and onto bookstore shelves. The great writer seems to take a cavalier attitude toward nearly everyone around him, though, including his wife, Karine (Virginie Desarnauts). Lolita strikes up a friendship with a young man named Sebastien (Keine Bouhiza) which seems to be leading to romance, but when Lolita learns that Sebastien wants to become a writer, she finds herself wondering if he really wants her, or just an introduction to her dad. Jaoui, who plays Sylvia, also directed Comme une Image (aka Look at Me) and co-wrote the screenplay.

Bob Zaremba
as Guy Who Is Seen Everywhere

Zelie Berger
as Mathieu's Friend in the Cafe

Henri Boyer
as Pianist at Pierre and Sylvia's

Bernard Blancan
as Waiter in the Village Cafe

Sebastien Andrieu
as Young Man Who Looks at Sylvia

Catherine Morin
as Woman in the Ad

Alain Debruyne
as Usher
View All

Critic Reviews for Look at Me

The pleasure of the film, as in many French films from Renoir to Rohmer, is in the exactitude of observation, the accuracy of the portrait and the elegance of the writing.

Although little about the story seems surprising or spontaneous, the film's delights lie in its acute observation of the characters and their interactions.

At best, a most watchable character study of lives that are more interesting than compelling.

[Has] a light, sometimes hilarious touch.

Jaoui sets her wryly observant sights on family, artistic ambition and the tyranny of physical appearance, and the result is a bright, briskly moving film whose modest scale belies the universality of its themes.

"Look at Me" is a wholesome work of fully rounded dramaturgy that spins on a gyroscope of sustained emotional momentum.

Examines a variety of questions, such as superficiality versus substance, materialism versus self-worth, and taking advantage of others versus forming sincere relationships.

Sadly, too much focus is spent on showing character traits that any kind of coherent story or compassion for characters is destroyed.

Forces the audience to ride the waves of some complicated relationships without having a built-in hero or heroine for which to root.

a sharp illustration of how it feels to resent someone you know you're supposed to love.

Agnès Jaoui's second film is the type of light, Foucauldian romantic comedy that only the French can make.

Audience Reviews for Look at Me

This is about a girl's relationship with her father, who is a famous and wealthy writer. Lolita can't get her father's attention, since he is too self-absorbed to notice her. Most people in her life seem to use Lolita to find a way to meet her father. Her self-esteem is eroded further by being a bit overweight and her beautiful young stepmother. This movie shows human relationships as they are.

Not the best to come out of the French cinema lately but not a bad Sunday afternoon flick to think about self image.

considering this script was a winner at the 2004 Cannes film festival, my expectations for this 'comedy' were much higher than this film's execution. finely acted, wonderfully self-absorbed characters, good script, but something was lost in the translation.

Exposes human relations they way they sadly happen to be. an impressive, mature, bitter and thought-provoking drama.

Look at Me Quotes