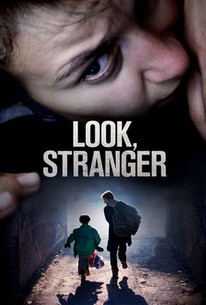 A woman finds herself stranded in a land torn apart by war in this independent drama from director Arielle Javitch. An unnamed woman (Anamaria Marinca) living in a nation where civil war has broken out is trying to make her way through a skirmish and find a safe haven. She stops in the nearest village and finds herself joined by a young girl (Valentina Berisa) also trying to find a place away from the fighting. The two encounter a messenger (Tom Burke) who is willing to serve as their guide; as the grimly determined woman and the resilient child follow the messenger though a blasted landscape, no one is sure if they'll find safety or just another battle at the end of the trail. Look, Stranger was an official selection at the 2010 Toronto International Film Festival.

There are no critic reviews yet for Look, Stranger. Keep checking Rotten Tomatoes for updates!

There are no featured reviews for Look, Stranger at this time.