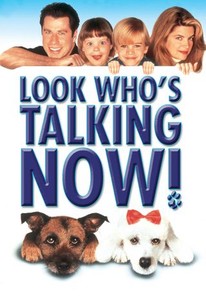 This final installment in the Look Who's Talking trilogy is a combination of Make Room For Daddy and The Lady and the Tramp. In the six years since the original Look Who's Talking, Mikey and Julie are now old enough to speak for themselves, so the producers came up with a new gimmick -- talking dogs. The Ubriacco family adopts two surly dogs, Rocks (the voice of Danny DeVito), a street-smart mongrel, and Daphne (voice of Diane Keaton), a snobbish pure bred poodle. The story kicks in with Christmas rapidly approaching and Molly (Kirstie Alley) out of a job. Because of this, her husband James (John Travolta) must work doubly hard to impress his new boss, Samantha (Lysette Anthony). But Samantha, it seems, has hired James for more than what appears in his job description. Samantha contrives a plan to get James to her cabin in the North Woods on Christmas Eve, where she plans to seduce him. James' family races to rescue him from the snowbound cabin, but when their taxi skids off the snow-covered road, it is left to the primal instincts of Rocks and Daphne to save the day. ~ Paul Brenner, Rovi

Charles Barkley
as Himself

Peter Iacangelo
as Dogs and Wolves

J.B. Bivens
as Ranger
View All

Look Who’s Talking Now Is Unmatched in Its Sheer Pointlessness
12 Comedy Sequels Nobody Asked For
Amazon Pilot Season 4: What the Critics Think

One nagging point: Pic seems aimed at kidvid market, but it revels in its ongoing references to open sexuality, including a reprise of opening credits that run over a microscopic view of squirming sperm. Very tasteful.

The preponderance of nudging innuendo was enough to earn the film a '12' certificate, thus excluding the audience of younger children who might otherwise have enjoyed the movie.

A movie so eager to shine that it arrives draped in several layers of sentimental tinsel and cutesy-pie decorations.

The first film had maybe a shred of realism to flavor its romantic comedy. This one looks like it was chucked up by an automatic screenwriting machine.

A crude and mawkish film in which dogs attempt to communicate with Kirstie Alley and John Travolta.

Although Tim Burton had nothing to do with it, this is certainly a nightmare before Christmas.

The Look Who's Talking series comes to a close with this absolutely terrible entry...

There is absolutely no chemistry between Travolta and Alley, who are supposed to be passionate about one another. Strangers on the set could have generated more sparks on-screen.

Look Who's Talking Now is a glutinous mix of all that's worst in movies.

This must be stopped.

Look Who's Talking Now open my eyes to realize that: dog movies sucks!

Jesus Christ! As if the failure of the second film was proof that one was enough, this one tries to go even cuter by having fucking dogs talk. Not only is that incredibly silly, it's really dumb and even more pointless. This film is not funny, the performances are lacking, and I can't really find a lot to enjoy with this one: it's tired, dull, and a waste of time.

Saw this once. That was enough.

This Movie is extremely Funny. You now even hear what the dogs think. lol