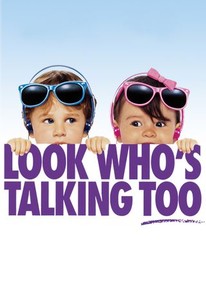 Look Who's Talking, Too Photos

Amy Heckerling repeats the successful formula of Look Who's Talking in this sequel, with the addition of John Travolta singing "All Shook Up" to a group of nursery schoolers and Mel Brooks cast as the voice of a toilet. The film begins with James struggling to support his family. He stills wants to become an airline pilot, but in the meantime is driving a cab. His wife Molly (Kirstie Alley) is struggling too, as a busy accountant. The strain is showing on their marriage, but then Molly becomes pregnant again, giving birth to a daughter named Julie (voice of Roseanne Barr). When the new baby arrives back home, their son Mikey (voice of Bruce Willis) has to contend not only with the new intrusion but also with Mr. Potty (voice of Mel Brooks). ~ Paul Brenner, Rovi

Nikki Graham
as Julie, as a Newborn

News & Interviews for Look Who's Talking, Too

View All Look Who's Talking, Too News

Critic Reviews for Look Who's Talking, Too

To call this film infantile would be too kind; to call it embarrassing would be accurate.

Simply a one-joke movie that too quickly wore out its welcome.

Audience Reviews for Look Who's Talking, Too

Not quite as entertaining as the first, but watchable all the same, with Roseanne Barr joining the cast voicing the new addition to the family.

An unnecessary sequel that tried hard, but ultimately failed. This film isn't completely without merit though- the cast is pretty okay. The main problem is that the idea is not bad, but it's not important. The original was fun and cute, and ended on a fine note. This just tries to top that...and fails.

Not a great sequel.

Okay, but nothing compared to the original. I like Roseanne, but the babies aren't nearly as charming, nor is the movie as well done as the original in nearly any way.

Look Who's Talking, Too Quotes