Looking for Comedy in the Muslim World2006

Looking for Comedy in the Muslim World (2006) 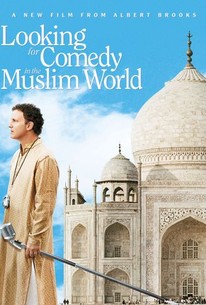 Critics Consensus: Although the premise seems ripe for laughs, Albert Brooks isn't ruthless or clever enough to pull it off.

Critics Consensus: Although the premise seems ripe for laughs, Albert Brooks isn't ruthless or clever enough to pull it off.

Critic Consensus: Although the premise seems ripe for laughs, Albert Brooks isn't ruthless or clever enough to pull it off.

Looking for Comedy in the Muslim World Photos

Comic and filmmaker Albert Brooks serves his country while struggling to get some laughs in this offbeat satiric comedy. Brooks plays himself, a comedic filmmaker whose most recent success was providing the voice of a fish for an animated feature and who has just been passed by as director for a remake of Harvey. As Brooks wonders what's going to happen next with his career, his wife (Amy Ryan), and his daughter, he's approached by government representatives who want him for a special assignment. The State Department, eager to better understand the cultural gap between the United States and the Middle East, have been directed by the president to make a study of what makes Muslims laugh. Brooks is asked to fly to India and Pakistan and bring back a 500-page report on Muslim humor; told the Medal of Freedom may be his if he comes through, Brooks accepts. With a pair of State Department officials in tow, Stuart (John Carroll Lynch) and Mark (Jon Tenney), and some help from a local assistant, Maya (Sheetal Sheth), Brooks sets out to find the funny bone of India's and Pakistan's Muslim communities, though it doesn't take long to find out what they don't find funny -- his standup act. Looking for Comedy in the Muslim World was originally set for release in the United States by Sony Pictures Classics, but when they became nervous over the film's title, they dropped the project and it was picked up for distribution by Warner Independent Pictures.

Albert Brooks
as Himself

Fred Dalton Thompson
as Himself

Penny Marshall
as Herself

Surinder Arora
as Man in Temple

Gabbar Singh
as Guide at Mosque

Raul Laskarov
as Man in Bar

News & Interviews for Looking for Comedy in the Muslim World

Trailer Bulletin: Looking for Comedy in the Muslim World

View All Looking for Comedy in the Muslim World News

Critic Reviews for Looking for Comedy in the Muslim World

Looking for Comedy succeeds smashingly both as a comedy and as a savvy deconstruction of comedy.

The movie has a perversely unifying effect: Muslims, Christians and Jews may not be able to agree on exactly who the heck Jesus is, but they're fully capable of bonding in boredom.

An essentially toothless affair, poking fun at American imperialism and its attendant cluelessness while never illuminating much beyond the obvious.

I think this thing is just flat and dead.

I like all of Brooks's features, which are brilliantly conceptualized and deftly executed. This one's no exception, and some of the laughs are genuinely cathartic.

A comedian should never attempt to be a diplomat.

Finally seeing this film so many years after I was told it was awful, I can't agree with the people who told me that. Perhaps I love Brooks' self-deprecating humor too much. Paul Chambers, CNN.

If there were any justice, the garlands now given to Woody Allen for Match Point would be handed over to Brooks

Brooks is going to India to shoot a movie (most of it filmed in New Delhi) about how to get laughs on foreign soil.

In Albert Brooks's new film, we get another plausible explanation of why we fight -- and it may be the most unsettling of all.

Those who like their humor wry and dry will be rewarded by a nuanced study of the way self-absorption can keep people disconnected, be they comedians, governments, or you and me.

Audience Reviews for Looking for Comedy in the Muslim World

An interesting movie. Quite good.

Albert Brooks is one of those actor-writer-directors who definitely hits and misses. Like Lost in America, this movie is mostly a hit. I laughed very hard for periods of time in this pseudo-documentary about Brooks' US government sponsored search to determine, in a 500-page report : ), what constitutes "funny" in India and Pakistan. I loved sequences like the job interview and, especially, Brooks' stand-up performance in India where he redefines impromptu comedy -- and revives one of his very early real-life ventriloquist routines.

More than anything in this, I was overjoyed to discover the acting and comedic talents of American-born Sheetal Sheth. She is definitely worth the watch, even if you've been disappointed by some of Brooks' work in years gone by.

Brooks fails to bridge that crucial sar-chasm that transcends any language barrier.

Looking for Comedy in the Muslim World Quotes