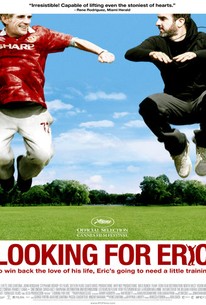 A man trying to put his life back on track gets some advice from an unexpected benefactor in this comedy drama from acclaimed British director Ken Loach. Eric Bishop (Steve Evets) is a postman living in Manchester whose life has been slowly going off the rails ever since his wife, Lily (Stephanie Bishop), walked out on him. Eric has just been released from the hospital after an auto accident, and comes home to a house that's a mess and two teenage sons, Ryan (Gerard Kearns) and Jess (Stefan Gumbs), who regard their dad as an annoyance rather than an authority figure. Eric's oldest child, a grown daughter named Sam (Lucy-Jo Hudson), loves him but can't get her mother or brothers to show him any respect. And his friends from work don't know what to do for him, except allow him to talk about football and his favorite team, Manchester United. One night, Eric is home alone, smoking some weed, and to his amazement he's visited by an apparition of Eric Cantona, the French footballer who was a star for Manchester United in the 1990s until he retired and dropped out of sight. Cantona's ghost has come to give Eric a pep talk and offer him some advice on how to win Lily back, and as Eric tries to convince his wife to give him another chance, Cantona periodically appears to coach him in the ways of romance. Looking for Eric was an official selection at the 2009 Cannes Film Festival. ~ Mark Deming, Rovi

Ryan Pope
as Fenner
View All

News & Interviews for Looking for Eric

View All Looking for Eric News

Critic Reviews for Looking for Eric

This is a deliberate 'feelgood' movie and, while I didn't feel bad, I just didn't feel much of anything.

The film feels a little slow at times, but its characters always seem real, and the final scene is genuinely heartwarming...

The motley crew of buddies, played by a passel of Manchester stand-up comedians, is a distinctive and amusing lot, and Evets does a great job in the lead

Loach strains hard for fun in Looking for Eric, but he's like a jokester who doesn't know how to tell a joke.

Looking for Eric emerges as a portrait of a world and a way of life.

One of the most engaging and impressive dramas to come out of British cinema this side of the millennium.

The film's whimsical spirit invites the audience to enter into a fablistic mindset and to relax into its uplifting air of camaraderie.

Softly goes to the heart of its working-class survivors as just so much mush.

Lighter than the usual Ken Loach feature, Looking for Eric marks a departure of sorts for the solemn director, but ultimately, it's a minor work.

Whimsical tale of two Erics is a winner.

A conventional and entirely dishonest turn of events ... undermine[s] everything that has come before in Looking for Eric.

Audience Reviews for Looking for Eric

A delightful and amazingly engaging tragicomedy that blends sadness, tenderness and a lot of humor to deliver this heart-warming story that benefits from some amazing performances - especially by a hilarious Eric Cantona at his most philosophical.

Looking for Eric is a gritty and realistic comedy-drama, which doesn't sacrifice laughter in-spite of all the glumness. Eric Bishop is a typical miserable northener on the surface, and we follow him through his juggling act of a life, as he's helped along by Eric Cantona. It's full of interesting and well devoloped characters, and the acting is really quite striking. Even Eric Cantana is good, proving that sports stars can act (well he is playing himself). Throw a happy ending into the mix, and you have a brilliant story of a man overcoming his troubles, with the help of friends.

An undeniable amusing feel good movie and Ken Loach's most entertaining one.Most of Loach's greatness is due to his screenwriter,who once again did a great job and wrote an another diffrent screenplay,which was flawed but atleast audience's interests were considered in it.There were few scenes that i didnt like,such as when Eric Cantona was talking about his football career and best moments of his life while some parts of his games was shown, which was inappropriate and also portraying an asshole like Eric Cantona as a hero who changed the man's life,while we know footballers are pricks.

The master of British working class cinema Ken Loach offers up a more light-hearted little film in the wake of his hard hitting Irish revolutionary film "The Wind that Shakes the Barley". Eric Bishop (Steve Evets) is a 50 something postman who's life has taken a serious downturn. He is plagued with regrets of his past, in abandoning his first wife and newborn baby and now struggling to manage his teenage sons from his second marriage. One of his outlets for fun is following his beloved football team Manchester Utd and it's from the past years of this succesful team that he is given some life coaching and guidance from none other than Eric Cantona, the French footballing sensation who is also famous for his philosophical ramblings. A far more uplifting film from Loach than his usual depictions of the british working class. This still has the gritty realism of his previous work but he's concentrated more on the humorous aspect of his and writer Paul Laverty's talents. This is all helped perfectly by an excellent lead performance by Evets as the downtrodden, angst riddled father and despite Cantona being no thespian, he manages to add a surprisng amount of humour to the film. An enjoyable way to spend an hour or so but I think I still prefer my Loach films, less poached and more hard-boiled.