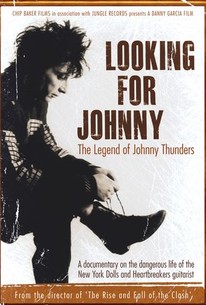 Danny Garcia's documentary Looking for Johnny profiles the career of the legendary punk rock guitarist Johnny Thunders. A founding member of the seminal punk group The New York Dolls, Thunders was considered one of the superstars of the CBGB scene, and cut genre defining tracks both with The Dolls and The Heartbreakers. However, his substance abuse problems led to an early death. The filmmakers interview a number of contemporaries like Lenny Kaye and Sylvain Sylvain, and load the film with a variety of archival performance footage.

Critic Reviews for Looking for Johnny

There are no critic reviews yet for Looking for Johnny. Keep checking Rotten Tomatoes for updates!

There are no featured reviews for Looking for Johnny at this time.