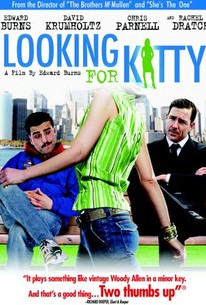 Two guys with different sets of problems find themselves bonding through unexpected circumstances in this independent comedy drama from writer and director Edward Burns. Jack Stanton (Edward Burns) is a former New York City cop who has been trying to establish a new career as a private detective, though his level of success is best indicated by the fact his landlord is about to evict him for not paying the rent. Jack finally lands a paying client when he's referred to Abe Fiannico (David Krumholtz), a high-school baseball coach whose wife, Kitty, has disappeared. The only clue Abe has to her whereabouts is a recent newspaper photo that shows a washed-up rock star hanging out with several women, one of whom is a dead ringer for Kitty. Jack sets out to scour the Big Apple in search of Kitty, and Abe tags along; a friendship grows between the two men, and Jack begins to wonder why regular-guy Abe ever got mixed up with a woman who doesn't seem to have much use for him. Also featuring Rachel Dratch and Chris Parnell, Looking for Kitty premiered at the 2004 Tribeca Film Festival.

Rachel Dratch
as Julie
View All

News & Interviews for Looking for Kitty

View All Looking for Kitty News

Critic Reviews for Looking for Kitty

Sentimental yet insensate, this forgotten '04 trifle is Burns at his worst ...

Burns turns in a nicely understated performance; but it's David Krumholtz, as Abe, who's the backbone of the movie.

Looking for Kitty offers moments of striking insight amid the inevitable self-indulgence.

Give Edward Burns at least a little credit for perseverance, because just about any other writer-director-actor who released a movie every couple of years to critical shrugs and audience indifference would've long since hung up his megaphone.

It might be the most maturely conceived role in Burns's films, but the plot around it is flimsy, the visual storytelling simpleminded, and the general ideas for character one-note.

Looking for Kitty's pervasively underwhelming atmosphere renders all of its positive attributes moot ...

They're just too dull, and we start to sympathize with the women who left them both behind.

Burns and Numbers' David Krumholtz are very good in portraying Jack and Abe's need to re-establish a human connection.

Burns seems not nearly as engaged with his story as one would hope. And why should he be? He could write another like this before lunch.

Another unsatisfying exploration of masculine anomie written, directed by and starring Edward Burns.

Burns simply doesn't delve deeply enough into his characters for them to have sufficient emotional resonance for the viewer.

Audience Reviews for Looking for Kitty

Looking for Kitty is the sort of indie comedy that is far too smug for its own good. It has some scenes that work well, but the film itself just feels too one-note, simplistic, and far too confined to justify its already brief running time. The characters aren't particularly interesting, the situations aren't particularly funny, and the narrative isn't nearly as clever as the filmmakers seem to believe it is. About the only thing it has going for it are the indie sensibilities that inject a sense of realism. That, however, only goes so far when there isn't much else to keep the audience engaged. The acting is serviceable, and the writing okay, but the story is too bland. Overall, a lackluster attempt at Woody Allen imitation. 2.5/5 Stars

A movie focused on character development, a good indie film.