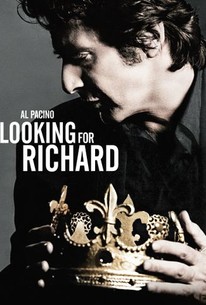 A workshop of William Shakespeare's Richard III inspires actor-director Al Pacino's breezy documentary, which aims to make the playwright accessible to contemporary American audiences. Though a noteworthy cast of stage actors and Hollywood stars (including Kevin Spacey, Winona Ryder, and Alec Baldwin) gathers to work on the play, Looking for Richard does not present a straightforward filmed version of the scheming, deformed king's rise and fall. Instead, Pacino turns the cameras on the rehearsal process and his own exploration of Shakespeare's history and meaning. Scenes in full costume alternate with readings in street clothes, while interviews gather the opinions on the Bard of everyone from renowned scholars and Shakespearean actors to random New Yorkers. A trip to England allows brief visits to Shakespeare's birthplace and the Globe Theater, but Pacino's focus remains on the United States and his desire to prove that American actors can act the plays without mimicking their British counterparts. Clearly a labor of love for Pacino, the film benefits from his passionate persona and direct, no-nonsense attitude; while the performances may vary in quality, the film manifests a refreshingly casual, unpretentious, and enthusiastic approach to Shakespeare. ~ Judd Blaise, Rovi

Frederic Kimball
as Bishop of Ely

Kenneth Branagh
as Himself

Kevin Kline
as Himself

Rosemary Harris
as Herself

Emrys Jones
as Himself

Peter Brook
as Himself

Barbara Everett
as Herself

Derek Jacobi
as Himself

John Gielgud
as Himself

Vanessa Redgrave
as Herself
View All

News & Interviews for Looking for Richard

View All Looking for Richard News

Critic Reviews for Looking for Richard

This runs 118 minutes, but it felt like six or seven hours.

Pacino's first film as writer/director is a marvellously intelligent, witty and imaginative exploration of the problems faced by anyone wishing to act in Shakespeare or translate the plays to film.

Pacino has made an informative, engrossing and hugely enjoyable movie that stands as a work of pure entertainment, almost as powerful as its inspiration.

There are actors' rehearsals and performances, and Mr. Pacino interviews experts, conducts man-on-the-street polls and stages collegial arguments with his cronies. Thus emerges the intricate story of Richard's ambition.

One of the best movies about the acting life.

An energetic but unsatisfying behind the scenes account of actors dress rehearsing or in street clothes rehearsing to do the Shakespeare play Richard III.

succeeds in giving us a greater appreciation for Shakespeare

That the film is a must for Pacino fans goes without saying; the surprise is how generally enjoyable it all is.

Almost inadvertently Pacino comes up with what must be one of the best films of his career.

A first-rate study of a famous actor coming to grips with a world-class challenge.

Audience Reviews for Looking for Richard

It is hard to imagine a world in which William Shakespeare has not, in one way or another, impacted our world. From how we view entertainment to the plans of our Government, they have all been influenced by the plays, sonnets, and poems of this one man. But with entertainment has Shakespeare impacted the most. To date, he is the only playwright whose works have been preformed the most, interpreted the most, and above all else, cherished the most. However, there is only one group of people that can say that they have been impacted the most by his works and that is actors. Now, why actors? That is because the only true, real way to understand Shakespeare is to act out one of his plays and live the life his creations have lived. Now, in the ninty nineties, actor Al Pacino (The Godfather Trilogy, Dog Day Afternoon, Scarface, Carlito's Way) decided to go and direct a handful of films to show the world in a way an actor sees. One of these films is this documentary that chronicles Pacino's involvement in a production of Richard III (said to be the most confusing, yet most preformed play written by Shakespeare). While showing his involvement, he says at the beginning that he is also wanting to show the world the Shakespeare he loves and his views. With numerous interviews with random people on the streets of New York and fellow actors, we can see that Shakespeare has sense become something of an idea that people only know the basics of but no one really knows who or what he is. Now, I first heard of this documentary completely by accident when I was looking up films to do with Al Pacino. When I sat down and watched this documentary, what it done was reopen my eyes to the power of Shakespeare and the legacy that he created for us all. But what really captivated me was how difficult it is for professional actors to preform Shakespeare. I know of people that think that, for actors, it is easy due to them being trained. Well, this film shows that, along with how confused the actors get over the story of Richard III. But what really makes this entire documentary stand out is how Al Pacino filmed rehearsals, made his own mini-film of Richard III (as in, found locations, got the costumes, and filmed a traditional film), and shows to such lengths to understand the mind of Shakespeare and his life. While all of that is going on, Pacino does try to make a point: Americans can have an understanding and an appreciation for Shakespeare. Early in this documentary, there is an interview with a person who, in a rather obscene way, say that the only people who even take Shakespeare seriously are the Japanese. And he is right. Over the past few decades, as English speaking nations (mostly America) start to bastardize their own language, other cultures have adapted into our past of playwrights and learn their own magic from these printed words. Plus, as said by one British Professor in the film, when America does a Shakespeare play, they just end up mimicking the British in such a way that it brings pure disgrace. Al Pacino had set out a complete quest to prove that America can still learn from and love Shakespeare, and if you are asking if he is able to accomplish that, you must see this documentary. It will open your eyes and give you a complete appreciation for the works of the man who is considered to be the greatest English playwright in history.

A study of acting from the master, Al Pacino. Although it's not totally concise, this is a very entertaining examination of the measures taken by actors to develop a character, and of Shakespeare's role in modern society. Highly recommended for Pacino fans and aspiring actors.

A documentary about the making of a movie... but not really, since they weren't MAKING the movie, they were making the documentary. More an exploration of the play, maybe. I don't know, but I found it fascinating all the same.

Self-indulgent crap. A decent cast is all its got working for it.