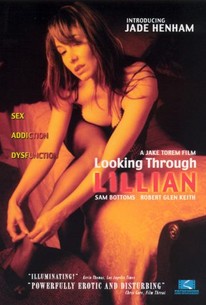 In this independent psychological drama, Lillian (Jade Henham) is a woman who is depressed and dissatisfied with her lot in life; she's the kept woman of a successful businessman, Gene (Samuel Bottoms), who has sexual identity issues and likes to dress up as Marilyn Monroe during his encounters with Lillian. Lillian longs for a different sort of relationship, and while Gene is away on business, she meets Luke (Robert Glen Keith), a handsome and seemingly sensitive writer who seems to offer a healthier perspective on love and sex than that to which she's become accustomed. However, in time she discovers Luke has secrets of his own, and now she finds herself torn between two men, neither of whom is giving her what she needs. Looking Through Lillian was the first feature film for director and co-screenwriter Jake Torem; leading lady Jade Henham also contributed to the script.

Critic Reviews for Looking Through Lillian

Torem swiftly moves beyond familiar first-feature artiness to create an illuminating portrait of a young woman (Jade Henham) brought to a crossroads in her life.

There are no featured reviews for Looking Through Lillian at this time.