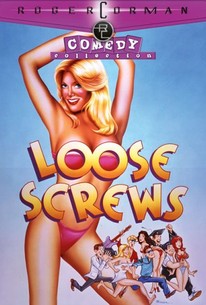 Filmed in just four weeks one fine autumn in 1984, this amateur teen sex romp, with not a lot of sex but a lot of trying, was released a few years later as Screwballs II. A melange of young men and women with only physical contact on their minds have been put together in the same boarding school by their trusting parents. Some inkling of the level of the comedy involved is revealed by the names of these erstwhile students: Steve Hardman, Hugh G. Rection, and Marvin Eatmore. Enough said. ~ Eleanor Mannikka, Rovi

Terrea Oster
as Wendy the Waitress

This teen movie is absolutely terrible in many ways, but it's also an interesting experiment.

Nowadays you can see bare knockers by pushing three random buttons on your keyboard, and you don't have to sit through 78 minutes of pitiful comedy to get to 'em.

Of all the crude and sexist teen "comedies" that came out in the 1980's, this is probably the crudest and sexist-est. And unfunniest! Larry David observed, "There are two kinds of people who wear sunglasses indoors: blind people and assholes," which perfectly describes this foursome of shade-stylists who attend a co-ed summer boarding school. No exaggeration that half the script is lame innuendo, and on top of everything else they feature a string of horrible songs to test your endurance. And don't forget the insulting Chinese impersonation! Must keep in mind that nobody forced the participating female cast into getting leered at, presumably they all got paid but that doesn't make the audience's sullied feeling go away. Makes Porky's seem like Oscar Wilde by comparison.