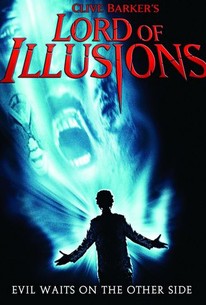 Critics Consensus: Lord of Illusions may come as something of a disappointment in the context of writer-director Clive Barker's best work, but genre fans should be reasonably diverted.

Critic Consensus: Lord of Illusions may come as something of a disappointment in the context of writer-director Clive Barker's best work, but genre fans should be reasonably diverted.

An ordinary private eye finds himself on a twisting, turning roller-coaster ride to hell when he enters the nightmarish world of a powerful, evil sorcerer masquerading as a sleight-of-hand magician and the murderous cultists that surround him. The shamus, Harry D'Amour, is based in New York, but all the trouble begins when he heads for Los Angeles to work on a case and finds himself involved with the worshipers who desire to reincarnate their evil master Nix, who was killed by the sorcerer Philip Swann, a former student of Nix. Swann makes his living as an illusionist whose tricks are anything but. Swann has Nix's corpse in his possession, but he refuses to divulge its whereabouts to the other angry cultists who now conspire to kill him. Philip's wife Dorthea fears for her husband and has hired D'Amour to guard him. Before Harry can help Philip, the magician ends up impaled by his own magical swords during a performance. Now Dorthea's life is endangered and D'Amour must simultaneously protect her and solve the mystery of the apparently late Nix.

Lorin Stewart
as Billy Who

Mike Deak
as Apparition In Repository

Heidi Wolfe
as Cultist
View All

News & Interviews for Lord of Illusions

View All Lord of Illusions News

Critic Reviews for Lord of Illusions

Barker's visual side dominates its literary equivalent this time out, resulting in a time-killer that may amuse fans until illusion is shattered by the rolling of the end credits.

Barker, who directed as well as wrote, establishes an effective rhythm in these scenes, and Bakula finds just the right note to play them.

From the mind of Clive Barker comes....one weird-ass horror noir.

The problem with the story is that it's overlong, full of bland details, and engrossed with bloodshed over sensible occult configurations.

Awesomely '90s Day-Glo noir, Lord of Illusions has everything you want.

Clive Barker is the Douglas Sirk of splatter.

Sadly, with Lord of Illusions, Clive Barker stumbles into the same pitfalls he did when he made Nightbreed just five years earlier. It's dull, unengaging, and features a plot that is stretched out far past its breaking point.

It's a sad day for both fright fans and the man Stephen King once prophesied was "the future of horror".

Better than people give it credit for, especially if the viewer fully appreciates the gay subtext.

Odd, but not uninteresting horror opus from Clive Barker.

Audience Reviews for Lord of Illusions

Prophesied by Stephen King to be the new savant of horror, novelist Clive Barker doesn't laxly embark on big-screen descents. For Barker, the scariest concept is the mundane depravity of people via occult influences ala Candyman and Hellraiser. To that extent, the disciples of Nix "The Puritan" (Daniel Von Bargen) are the most frightening components as they skin human and animal carcasses in a hypnotized daze of worship. It could be contended that Lord of Illusions is his most ambitious with its emphasis on FX-augmented black magic and Phillip Marlowe film noir. With a five-o'clock shadow and Budweiser-gulping, self-loathing style, Scott Bakula is a chiseled 50's detective but he is too passive to be the grizzled hero. Barker can conjure phantasmagorical visuals that seep into the subconscious (ex. A fortune teller with scalpel acupuncture through his midsection and hourglass sand pouring through a body.). The most dastardly of which is Swan's (Kevin J. O'Connor) macerating death on stage in front of a packed auditorium from falling swords on a rotating chandelier. Bargen, in his resurrected form, is chilling with the piebald outline of an iron-maiden mask around his face and his pineal gland throbbing on his forehead. His voice is now a baritone rumble as he preaches about "wisdom from beyond the grave". Most hocus-pocus flicks err on needless gore but Barker is too thought-provoking for such a fate. He intelligently asks whether the messiahs utilized trickery for their miracles and if demonic spirits are responsible for true acts of mysticism. The special effects are not faultless. For instance, a holographic security guard and triangular origami are too artificial and rudimentary in a post-1995 world. But the gooey reanimation of Nix is a symphony of pulsating ectoplasm like Frank in Hellraiser. Mindless sycophancy is a spine-tingling area to explore and Barker really taps into the terror of a group of brainwashed lamb under the spell of a supernatural deity. In his repertoire, Lord of Illusion is Barker's operatic sorcery opus.

Clive Barker's Lords of Illusions is a slightly more developed film than his previous film, Night breed. I thought that Night breed was a decent affair, but it was nowhere near as good as his directorial debut, Hellraiser. This film is a well crafted horror tale that Barker conjures up from his brilliant, twisted imagination. The film is a well structured tale that will entertain you from start to finish. The cast do a fine job with the script and the visuals are impressive and terrifying. Clive Barker is a master of horror and he directs something truly original and worthwhile for genre fans. The cast that he directs is quite good, and there are plenty of effective performances. I really enjoyed the film, and thought it was a fine achievement for Barker, who knows exactly how to create effective terror. This is a well crafted movie that will delight die hard Clive Barker fans. The film is edge of your seat entertainment from start to finish, and with a well written script, Barker conjures up some truly intense moments that will pull you into this nightmare. Clive Barker has the talent to truly create something that will terrify you, and with Lord of Illusions, he crafts something truly intense and creepy. He is gifted in giving the viewing audience something truly memorable. Even if this isn't his best work, Lord of Illusions is a good horror film definitely worth checking out if you love Barker's work. Lords of Illusions is a horror tale that is effective, and it is only a film that can Clive Barker could have created. Everything you'd expect from him is apparent here, and he has made his best movie since his impressive 1987 directorial debut, Hellraiser.

I had such high hopes for this movie; based on a book by Clive Barker and with a good cast. I even liked the theme of real magic being resisted by one talented in the field but turned off by seeing its extreme. But this movie seems like a huge muddled narrative mess with ugly effects. Poor pacing and execution killed this movie. What a disappointment.

You know when you're watching a film by Clive Barker, that you're in good-hands. When I saw this film was floored by an oddly-believable tale of magic, both ancient and modern. It's interesting to note that Mr. Barker is well-versed in occult-lore, and that when you view his films he's trying to mess with your head on several-levels at-once. Magic is real, we do it every day, but it's seldom-acknowledged. When we think-of-something--an action, or a wish--and we externalize-it into-reality, we have done something that is magical. Animals are also capable of this, but none-so-well as human-beings. Technology is also an externalization of the human-mind (and body), and stems from a scientific-tradition that began with alchemy. In the mystery-traditions, an initiate would be immersed in a symbolic-environment, just as advertising does today for darker-aims! We live illusion every-single-day. If-only it wasn't dead in pustulent-Hollywood. The battle-between the flesh and this world is eternal, and Clive Barker throws us into the midst of this battle. The film begins in-flashback to a cult-compound that looks a disturbingly-similar mix between the Branch Davidian one in Waco, and Spahn Ranch in Death Valley (once-populated by the Manson Family). This is the story of the birth of a religion, and where-else do they usually begin? The desert, of-course. But Barker takes-it-further, and we get what could be taken as an inversion of the Christian-myth of Jesus. Nix is the messianic-figure, who tells his disciples, "Fire spoke to me and said--NIX, you are the chosen-one, the Puritan." Unlike Christ's meeting with Satan in the desert, Nix succumbs-to-temptation, and his hatred for the material-world. Has he met-with darkness, or fire-itself, an elemental-force? Barker let's US decide throughout what we are seeing-and-hearing--yes, he's playing-with us. Maybe this isn't an inversion of Christianity, after-all... But, Nix is betrayed in the opening-prologue by his chosen-one, Swann. 13-years pass, and Swann is an incredibly-successful stage-magician, using the skills taught him by Nix. He has a consort in Dorothea, and in a direct-reference to Gnosticism, a wizard's assistant in Valentin. Being our cinematic eyes-and-ears, we are introduced to the Detective Harry D'Amour, a gumshoe with a penchant for the unknown in the occult-underworld. We get-treated to some great film-noir moments thanks to Barker's genius-take on the P.I. character, and it blends with horror effectively. A lot of credit has to go to Scott Bakula for his performance as D'Amour, it's a tightrope-role that requires a subtle-approach, with a little humor and cynicism. He's our surrogate, and his disbelief is crucial to our accepting the realities of this story, a tall-order! I believe Barker and his collaborators succeeded in-spades. Interestingly, Clive makes a wonderful-homage to Orson Welles (himself an illusionist of high-caliber) in the early murder-scene of the fortune-teller. It's shot in the very-same Venice locations as Welles' "Touch of Evil" (1958), a noir-classic. In some-respects, this film also resembles Welles' "Mr. Arkadian", with a detective searching a man's past as the central-narrative--this was also copied by Alan Parker and his writers on "Angel Heart" (1986), another classic of horror. Barker also references Mario Bava's "Black Sunday" (1960) with the tale of a resurrected-witch/wizard, and the mask that punctures Nix's face into a ghastly-visage. By the end of the film, it's clear that Nix has come to destroy the world, and we are shown realities we'd rather forget. In-a-sense, there are many criticisms of ALL world religions here, even esoteric-ones. Barker condemns the notion that it is the world that corrupts, and that material-reality is the only source-of-evil and destruction. Mankind can be that essential-ingredient ("Fire spoke to me and said...") of chaos and destruction--we hold our fates in our own-hands, we are that hand-of-fate in occultism. We stare into-the-abyss, like Nix and Swann, and realize there is nothing, only ourselves. WE are the meaning in the universe, because we create that meaning. Nix, his followers, and Swann succumb to this, and decide non-existence is better. Harry D'Amour, and his allies in the story, do not. The battle, then, is between creation and destruction, not good-versus-evil. D'Amour and Dorothea are an erotic and productive-dyad, whereas Swann and Nix are not. The Apocalypse is always in human-hands when individuals succumb to the forces of the universe that are destructive. They have given-up. Its too bad we didn't get any more Harry D'Amour films or tv series that was talked about at one time. This movie was a great start to new horror/fantasy series. Maybe we will see D'Amour back on screen one day