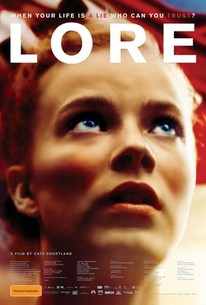 Left to fend for themselves after their SS officer father and mother, a staunch Nazi believer, are interred by the victorious Allies at the end of World War II, five German children undertake a harrowing journey that exposes them to the reality and consequences of their parents' actions. Led by the eldest sibling, 14-year old Lore (striking newcomer Saskia Rosendahl), they set out on a harrowing journey across a devastated country to reach their grandmother in the north. After meeting the charismatic Thomas, a mysterious young refugee, Lore soon finds her world shattered by feelings of both hatred and desire as she must learn to trust the one person she has always been taught to hate in order to survive. Lush cinematography and an evocative, haunting mood infuse this unconventional take on the Holocaust legacy with unforgettable impact. (c) Music Box

Lore is a akin to a bourgeois German version of Elem Klimov's 1985 Belarus-set Come and See, and it has some outstanding features. The star turn is the lurking cinematography of Adam Arkapaw.

The Australian director Cate Shortland has made a quite stunning film about the collapse of Nazi Germany, seen not from a Berlin bunker but through the eyes of a 14-year-old girl.

The bleak backdrop is rendered with great beauty-so much so that perhaps the sensory poetics of the visuals linger beyond their darker implications.

The young principals here, Malina and especially Rosendahl, are superb at conveying that premature hardening, their elastic minds pummelled by inelastic forces.

The sins of the Fatherland send a German teenage girl and her Nazi-connected family on the run in Australian director Cate Shortland's vividly rendered and sensual drama Lore.

A film you simply don't want to miss.

Shortland has created a moving, intriguing and complex film, which provides one of the most intelligent and honest approaches to both Nazism and the holocaust seen on screen in recent years.

The portrait that emerges proves, above all else, one of resilience and adaptability.

A disastrous drama that feels repetitious and pointless, never making clear what Shortland wants to say with this - and her heavy-handed direction makes even more blatant the way she embraces the most obvious soap-opera clichés and cheap narrative artifices.

A fascinating look at the family of a Nazi officer after suffering defeat in 1945, and difficulty they and their countrymen have in grappling with a shattered world view. Beautifully filmed with a haunting performance by Rosendahl as she is forced from her cocoon of Nazi idealism and privilege into a world of privation, death and chaos. Excellently directed, "Lore" is a stunning and thought-provoking experience in a way different from any other World War II films I have seen. Highly recommended.

Jane Campion visuals, only Jane does it so much better; "Two Women" derivative, although there is little to compare, why did this story have to make it to the screen? It is an affront to show these healthy and robust survivors, besmudged with some grime to show the passing of time, when there was little left for any one. Rubbish!