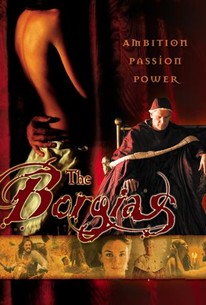 The story of Spain's most infamous family is brought to the screen with surprising subtlety in this historical drama. Near the end of the 15th century, the Borgias are one of the most wealthy families in Europe, with their numbers divided between Spain and Italy, and when Rodrigo Borgia (Lluis Homar) is elected as Pope, his three sons -- Cesar (Sergio Peris-Mencheta), Juan (Sergio Muniz), and Jofre (Eloy Azorin) -- find themselves raised to positions of power as their father arranges politically advantageous marriages for them. Rodrigo's daughter Lucrecia (Maria Valverde) is also used as a bargaining chip when he persuades her to wed Giovanni Sforza, the favored son of a family often in opposition to the Borgias. While Rodrigo benefits from these alliances, his children do not -- Cesar's dreams of serving in the military are dashed when he is made to join his father in the church, Juan's time in the Army is full of unhappy consequences, Jofre's marriage to Sancha of Aragon (Linda Batista) is not fated to be a happy one, and murder stains the lives of most of the family. Originally shot as a mini-series for television, The Borgias (aka Los Borgia) was reedited for theatrical release in Spain, where it became a success at the box office.

Linda Batista
as Sancha of Aragon

There are no critic reviews yet for Los Borgia (The Borgia). Keep checking Rotten Tomatoes for updates!

There are no featured audience reviews yet. Click the link below to see what others say about Los Borgia (The Borgia)!