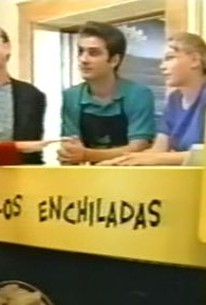 Writer/director Mitch Hedberg makes his feature-film debut with this comedy about working stiffs in Minneapolis. Hedberg stars in Los Enchiladas! as Lee, a prep cook at a Mexican-style chain restaurant near a Twin Cities shopping mall. While Lee is something less than ambitious and doesn't take well to responsibility, he finds it thrust upon him when his shift manager takes a powder and the head chef decides it's time to leave the restaurant and pursue his dream -- writing menus for other people. Meanwhile, Lee has to deal with cranky co-workers and even crankier customers as the day wears on. Los Enchiladas! was shown at the 1999 Sundance Film Festival.

Jim Jorgensen
as Chef
View All

There are no critic reviews yet for Los Enchiladas!. Keep checking Rotten Tomatoes for updates!

There are no featured audience reviews yet. Click the link below to see what others say about Los Enchiladas!!