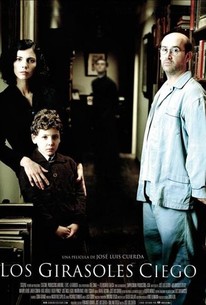 Having previously explored the ways in which war robs children of their innocence in his 1999 drama The Butterfly's Tongue, director José Luis Cuerda once again turns his attentions towards the Spanish Civil War and its devastating aftermath with this period drama set in 1940 and following a family forced to live a lie in order to avoid death. To the outside world, Elena (Maribel Verdú) is a caring mother who lives alone with her son Lorenzo (Roger Príncep) and daughter Elenita (Irene Escolar). Unbeknownst to anyone except her immediate family, however, is the fact that her husband Ricardo (Javier Cámara), a Republican schoolteacher, is also hiding out in the family home. Meanwhile, Lorenzo's teacher Salvador (Raúl Arévalo) remains deeply shaken by the horrors he both witnessed and partook in as a soldier in the war. Salvador was still a wide-eyed seminary student when he was sent off to fight, his experiences on the battlefield casing him to question both his faith and his allegiance to the government. Later, when Salvador meets Elena, he begins to form a dangerous obsession with the beautiful woman that soon threatens to destroy her entire family.

There are no critic reviews yet for Los Girasoles Ciegos (The Blind Sunflowers). Keep checking Rotten Tomatoes for updates!

Very good, but too obvious at times, and the poet's story is mercilessly butched. The story adapted is better than that story in the book.