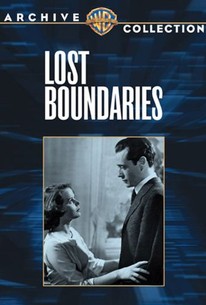 Until the House Un-American Activities Committee horned in, several postwar Hollywood films dealt with touchy "liberal" subject matter. Lost Boundaries stars Mel Ferrer as a light-skinned African-American, whose family is "passing" in an all-white New England community. When the truth comes out, the more bigoted neighbors demand the expulsion of Ferrer and his family. Considered pretty potent stuff in 1949, Lost Boundaries appears fairly conventional today, especially in its reluctance to cast a genuine black actor in the lead. ~ Hal Erickson, Rovi

Viewed as emotional entertainment, as social enlightenment or both, it is one of the most effective pictures that we are likely to have this year.

[The film] is truly one of humane ideals and skillful workmanship.

A generally inadequate treatment of the subject. A pity, in view of the magnificent job it might have done.

At least it steps up to that plate and swings and takes a healthy sock. And the movement, the determination will make people think.

Daring for its time, when viewed today it seems tame.

There are no featured reviews for Lost Boundaries at this time.