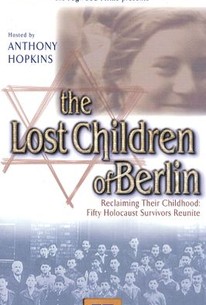 In the dark days of Nazi Germany, Jewish schools were shut down one by one as the students and their families were herded into ghettos or sent to concentration camps. But amid the countless stories of tragedy and death are the miraculous stories of those who survived. This documentary, produced by Steven Spielberg and the Shoah Foundation and narrated by Anthony Hopkins, tells one of these stories -- that of the last Jewish school in Berlin to be shut down in 1942 and the 50 students who survived the war to meet again at a 1996 reunion in the newly reopened Grosse Hamburgerstrasse School.

The narration, delivered by Anthony Hopkins, is burdened by cliches, but the old photographs of the schoolmates are poignant.

There are no featured reviews for Lost Children of Berlin at this time.