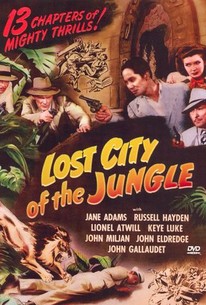 British character actor Lionel Atwill, in his final performance, appears as a war-monger attempting to get rich from other's misfortune in this 13 chapter Universal serial. Sir Eric Hazarias (Atwill) is searching the mountains of the Himalayas for Metorium 245, the only known antidote to the Bomb, which he then plan to sell to the highest bidder. The infamous megalomaniac is opposed by United Peace Foundation investigator Rod Stanton (Russell Hayden); archeologist Dr. Elmore (John Eldredge and his daughter Marjorie (Jane Adams); and local guide, Tal Shen (Keye Luke). But to everyone's surprise it is suddenly revealed that "the power in back of Sir Eric" is none other than his secretary, the even more nefarious Malborn (John Mylong). The reason for this sudden change of direction was the tragic fact that Atwill was suffering from bronchial cancer (he died April 22, 1946). Bits of dialogue filmed earlier were inserted throughout the 13 chapters and actor George Sorel doubled Atwill in several scenes, the villain's trademark Panama hat pulled well down over his face. In yet another economy move, The Lost City of the Jungle used stock footage from Columbia's earlier Lost Horizon, the 1943 Maria Montez vehicle White Savage, and even Leni Riefenstahl's legendary White Hell of Pitz Palu.

Critic Reviews for Lost City of the Jungle

There are no critic reviews yet for Lost City of the Jungle. Keep checking Rotten Tomatoes for updates!

There are no featured reviews for Lost City of the Jungle at this time.

Lost City of the Jungle Quotes