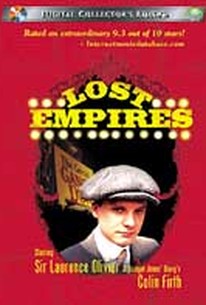 This seven-part British miniseries was based on J.B. Priestley's autobiographical novel, originally published in 1965. Colin Firth starred as Richard Herncastle, a young and impressionable Yorkshire lad who in 1913 signed on as assistant to his Uncle Nick (John Castle), a professional magician. During the next year or so, Richard toured with Nick throughout the provinces as part of an Empire Music Hall circuit performing troupe. His delightful and sometimes shocking experiences with his fellow vaudevillians (among them such long-forgotten acts as Dunffield's Dogs and the Musical Tiplows) came to an abrupt end when WWI was declared and Richard was called to the colors. Largely filmed at the old Burton Opera House, which actually did serve as a music hall in years gone by, Lost Empires was telecast by ITV in 1987. ~ Hal Erickson, Rovi

There are no critic reviews yet for Lost Empires. Keep checking Rotten Tomatoes for updates!

There are no featured audience reviews yet. Click the link below to see what others say about Lost Empires!