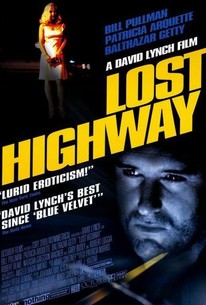 Critics Consensus: Marking a further escalation in David Lynch's surrealist style, Lost Highway is a foreboding mystery that arguably leads to a dead end, although it is signposted throughout with some of the director's most haunting images yet.

Critics Consensus: Marking a further escalation in David Lynch's surrealist style, Lost Highway is a foreboding mystery that arguably leads to a dead end, although it is signposted throughout with some of the director's most haunting images yet.

Critic Consensus: Marking a further escalation in David Lynch's surrealist style, Lost Highway is a foreboding mystery that arguably leads to a dead end, although it is signposted throughout with some of the director's most haunting images yet.

Set in a city suspiciously like Los Angeles, both blazingly modern and resolutely retro in look and feel. A jazz musician, tortured by the notion that his wife is having an affair, suddenly finds himself accused of her murder. In a parallel story, a young mechanic is drawn into a web of deceit by a temptress who is cheating on her gangster boyfriend. These two tales are linked by the fact that both women may, in fact, be the same woman. The men are also connected by a mysterious turn of events that calls into question their very identities.

Guy Siner
as Prison Official No. 1

Alexander Folk
as Prison Official No. 2

Amanda Anka
as Girl No. 1

Matt Sigloch
as Assistant No. 1

Gil Combs
as Assistant No. 2

It's pensive male anxiety, and for some cultural reason it's easier for audiences to accept female hysteria than the insecurities of men.

Visually arresting, the movie does keep you going until the finale confirms suspicions that Lynch has painted himself into a corner.

[Lynch] knows how to put effective images on the screen, and how to use a soundtrack to create mood, but at the end of the film, our hand closes on empty air.

Lost Highway is a space of high-contrast shadows and no pity, where personifications of doubt and jealousy taunt you like a Greek tragedy unfolding on the creepiest roads of interdimensional California.

Senses of unease and menace are soaked into every scene. It is genuinely disturbing in places, adding up to an overall frightening experience that tops close to every horror work of its decade.

Beyond subversive and downright ahead of its time.

Here, the road leads nowhere in particular; what you pay for is the ride.

What Lost Highway lacks in originality--compared to the rest of Lynch's oeuvre--it regains when compared to anyone else's films.

Its demented darkness actually coallesces into a strange kind of giddy joy - not unlike the rush of adrenaline one feels after a brush with danger.

Mesmerizing yet cold and remote -- an exotic fish we can't touch.

"l like to remember things my own way" Whenever you approach a David Lynch film, you really have to be prepared for a surrealistic, mind-boggling challenge. His films rarely come as an easy pass to answers or entertainment and can even frustrate to the point of absolute bewilderment. Lost Highway is no different and ranks alongside Inland Empire as, probably, Lynch's most difficult film to date. Jazz saxophonist Fred Madison (Bill Pullman) awakes one morning to find a video tape lying on his doorstep. He and his wife Renee (Patricia Arquette) watch the tape only to find that someone has been filming the inside of their house. The tapes appear with increasing regularity, each time revealing more and more footage. This only adds to Fred's suspicions of his wife and her friendships outwith their marriage. Not before long Fred is drawn into a labyrinthine plot with a Mystery Man (Robert Blake), ferocious gangster Mr. Eddy (Robert Loggia), pornography, murder and teenage mechanic Pete Dayton (Balthazar Getty) who may, or may not, be involved. Working on the script alongside his Wild At Heart author Barry Gifford, Lynch crafts an experience that truly is a hallucinatory nightmare and one of the most effective horrors I've ever seen. It's a great combination of noir and horror with shady characters, femme fatales and downright freakish oddities and there's an ambience that's classic Lynch with his very unsettling and minimalist approach. The man can craft sinister from absolutely nothing; bare lamps, shadows and vacant spaces speak volumes and he's aided considerably by - regular collaborators - Angelo Badalamenti's foreboding score and Peter Deming's hugely effective cinematography (which was supposedly shot in one of Lynch's own L.A. homes). Some critics have been harsh on Lost Highway, claiming that it's self-indulgent and lacks depth but it's one of those films where you really have to pay attention. Even the minutest detail can be so important to unraveling the mystery. It's a film of two halves and the trick is in trying to piece the two to make a complete whole. The first half of the film is fairly linear but in the second, a metamorphosis takes place that really is a bizarre and confounding plot twist. From that moment on, nothing is as it seems and it just gets weirder and weirder. Only Lynch can get away with this kind of mind fuck. And get away with it he does. It's a hugely involving and complex piece of work. So much so, that you actually question whether you're intelligent enough to understand it at all. Is there a point? Who knows for sure. I have my theories as I'm sure many others do but the beauty in this film is that it's a transcendental piece of art. Does there need to be a point or is it like all other great art, whereby you interpret the voids for yourself. The voids where the artist isn't readily giving you clarity. How it affects each viewer will, no doubt, be different and unique and there's not many filmmaker's or artists out there can still achieve such an impact. If you're reading this review, looking for definitive answers, then you're looking in the wrong place. If I did offer my answers to the conundrum, it would only rob you of your own experience. And anyway, like all great works of art, you already have the answers. The answers that make sense to you. They're not mine, they're not anybody else's, they're yours. And that's what I love about this filmmaker. There's no-one quite like David Lynch and his idiosyncratic genius. One things for sure, it explores the themes of sexual insecurity and paranoia but when it operates on a metaphysical level that's when things get very challenging. You could view it from a schizophrenic angle, it could be an alternate reality, an underworld purgatory or you could be trying to interpret dream hallucinations and suppressed memories. It could be many things and although I have settled on a particular meaning, my reasoning could be entirely different to another's. Put simply, it's open to interpretation and will depend on each and every individual viewer and what they bring to the experience themselves. You just have to open yourself up and embrace it. And therein lies the art. You could argue that this is Lynch's most cerebrally nihilistic film to date and a variation on the same themes explored in Mulholland Drive and Inland Empire. Like those films, I have seen it many times and each time I manage to decipher another piece of the puzzle. For years, I couldn't make heads nor tales of it but I now have a better grasp on what (I think) it's all about. However, trying to work it out is not in the slightest bit easy. All I know, is that I love the experience each and every time and sometimes I even question why. Mark Walker

A jazz saxophonist is accused of murdering his wife; on death row, he mysteriously suddenly turns into a young mechanic who is released and has an affair with a gangster's moll who looks exactly like the dead wife. A lush and sensuous Lynchian nightmare borrowing equally from horror movie and film noir; much like his succeeding film, MULHOLLAND DRIVE, except more baffling.

Another David Lynch film that will baffle you as you try to work out what is real, what isn't, what is going on? It's not quite as strange as some of his other films, but that's not saying much. He does have a slick style though, one film that will make you think about it long after viewing.

Underrated and creepy as hell, Lost Highway is two stories mashed together. Robert Blake is one of the scariest things I've ever seen in this one.