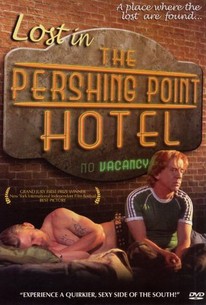 Leslie Jordan writes and stars in this autobiographical account of being gay and drug-addled in 1970s Atlanta. The film opens with the protagonist known only as Storyteller (Jordan) meeting his maker after a drug overdose and trying to explain the sorry state of his former life. Rewind 20 years, when our hero, styling himself as a lilliputian dandy à la Truman Capote, leaves home for Atlanta -- dubbed the "San Francisco of the South." There he meets debutante refugee and drug connoisseur "Miss Make-Do" (Erin Chandler) who introduces him to the wonderful world of chemicals and the film's titular hotel -- a low-rent Chelsea-like dive. After his benefactress kicks him out for taking up with a thuggish coke dealer, the hapless fop protagonist finds another protector in Tripper -- a roughneck junkie, ex-con, and pimp. The two form a weird platonic and dependent relationship that eventually spirals into an opiate oblivion.

Critic Reviews for Lost In The Pershing Point Hotel

There are no critic reviews yet for Lost In The Pershing Point Hotel. Keep checking Rotten Tomatoes for updates!

Audience Reviews for Lost In The Pershing Point Hotel

There are no featured audience reviews yet. Click the link below to see what others say about Lost In The Pershing Point Hotel!