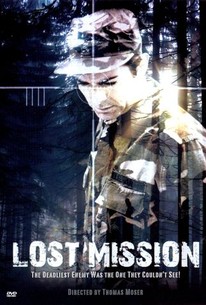 Five American soldiers training in the Alpine mountains of Northern Italy face the ultimate test of endurance and psychological strength when a mysterious sniper begins stalking their every move. It was supposed to be a typical training exercise, but when the bullets started to fly all bets were off. A sniper is gunning for the soldiers under the cover of the dense local foliage, and it quickly becomes apparent that the lieutenant in charge is in way over his head. If they don't make it to their rendezvous in time, chances are good that no one in the squad will make it out of the forest alive. But who can be trusted when your own eyes and ears - much less your fellow soldiers - prove hopelessly unreliable?

There are no critic reviews yet for Lost Mission. Keep checking Rotten Tomatoes for updates!

There are no featured reviews for Lost Mission at this time.