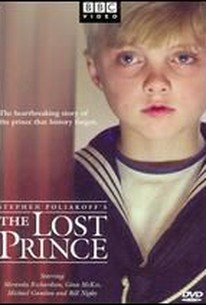 This historical drama from director Stephen Poliakoff was produced for and originally aired on the BBC. Miranda Richardson and Tom Hollander star as Queen Mary and King George V. After discovering that their son Prince John (Daniel Williams and Matthew Thomas) suffers from epilepsy and learning disabilities, the royals have the boy sent off to be raised in a rural farmhouse, lest he tarnish the family's image of superiority. Removed from the public eye and the attention of his parents, Prince John forms a loving bond with his nurse, Lalla (Gina McKee). ~ Matthew Tobey, Rovi

Critic Reviews for The Lost Prince

Stephen Poliakoff delivers a visually sumptuous two-part drama that unfurls these seismic events through the innocent, idiot-savant eyes of a little boy in a sailor suit, witnessing, but excluded from, his family's trials.

The movie is a little boring. Jacques Derrida, you are already missed.

The Lost Prince, along with Shooting the Past and Perfect Strangers, also represents Poliakoff's contribution to the changing form of television drama.

Poliakoff does his royal subjects the favor of finding them human, even if not especially cuddly or even always very nice.

Poliakoff's script is scrupulous in its attention to the minutiae of the period and the quirks of a life lived in such exalted ignorance, yet the characters do not disappear in the detail, and it is rich in personality.

In The Lost Prince, Poliakoff took a historical moment and built it into something disjointed, scaffolded, cold and unbelievable.

The Lost Prince is a gorgeously filmed, bittersweet study of family dysfunction and the resiliency of the spirit in the face of loneliness and rejection.

Audience Reviews for The Lost Prince

Oh that BBC! Another wonderful production. Moving. Inspiring. All around really well done biodrama. Tissues a must by the time it all wraps up...

Overlong drama is well made but far too leisurely paced. Miranda Richardson stands out.