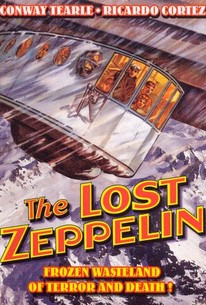 The Lost Zeppelin offers a bonanza of special effects and art-deco sets with a nickel's worth of plot. The film begins at a banquet celebrating an upcoming dirigible expedition to Antarctica. Explorer Donald Hall (Conway Tearle) knows that his protégé, lieutenant Tom Armstrong (Ricardo Cortez) is in love with Hall's young wife Miriam (Virginia Valli). Just when this plotline reaches its saturation point, it is forgotten in the excitement of the daring dirigible voyage. Utterly modernistic in design and equipped with every possible convenience and provision, the big blimp nonetheless meets disaster in the snowy wastes of "Little America." Somewhat slow-moving for most of its running time, The Lost Zeppelin really picks up the pace in its closing reels and remains among the most impressive of the early independent talkies.

There are no critic reviews yet for Lost Zeppelin. Keep checking Rotten Tomatoes for updates!

There are no featured reviews for Lost Zeppelin at this time.