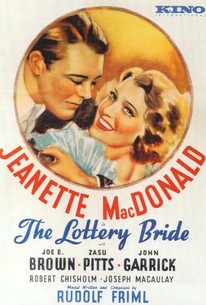 Based on "Bride 66", a tone poem by composer Herbert Stothart, The Lottery Bride takes place in a distinctly Hollywoodized Norway. Ever on the lookout for extra cash, heroine Jenny Swanson (Jeanette MacDonald) coerces her sweetheart Chris Svenson (John Garrick) to participate with her in a three-day marathon race. When the exhausted couple fails to win first prize, Jenny enters herself in a "wife lottery." Though the lucky winner appears to be Chris's older brother, it is actually Chris himself -- but he isn't aware of it, having embarked on a dirigible expedition to the Yukon. Only after surviving a crash landing does Chris return home for a blissful reunion with Jenny. With a plot this silly, why did the producers bother to hire Joe E. Brown and ZaSu Pitts as comedy relief?

Critic Reviews for The Lottery Bride

There are no critic reviews yet for The Lottery Bride. Keep checking Rotten Tomatoes for updates!

There are no featured reviews for The Lottery Bride at this time.