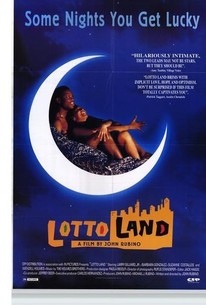 The lives of four hardworking people living in modern Brooklyn provide the basis of this upbeat drama. Hank is the only high school graduate on his basketball team; he works for Flo in a neighborhood liquor store and is dating Joy, Flo's step daughter. Joy and Hank are 18-year old virgins who are giving careful consideration to sleeping with each other. Hank's father, Milton is a divorced street musician and recovering alcoholic. The story revolves around an upcoming lottery with a $27million jackpot, and everyone in their neighborhood is hoping to win. Joy's father, whom she hasn't seen in ages, bought seven tickets just before he was arrested and sent to jail; Hank, who, unlike his friends, has no taste for drugs or drug dealing, himself has purchased $100 worth of the tickets. The drawing is made and the authorities state that the unclaimed winning ticket is somewhere in their neighborhood.

Paul Calderon
as Reinaldo
View All

Too crudely made to be effective.

Never gets off the ground.

There are no featured audience reviews yet. Click the link below to see what others say about Lotto Land!