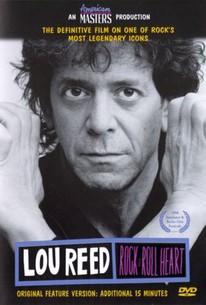 This documentary traces the life and career of singer-songwriter Lou Reed, from 1965, college, and the Velvet Underground, to 1975 solo performances, 1990s poetry readings, and theater collaborations. Concert footage is intercut with over two dozen interview subjects. With a transfer from video to 16mm, this film mixes black-and-white and color. Made for the American Masters (PBS) series, it was shown at the 1998 Sundance Film Festival.

The film's strengths lie in the interviews.

Yes, it's a bit of a puff piece, but Lou Reed -- who gave his blessing and full cooperation to this stylish and informative overview of his career -- probably wouldn't have it any other way.

There are no featured reviews for Lou Reed: Rock and Roll Heart at this time.