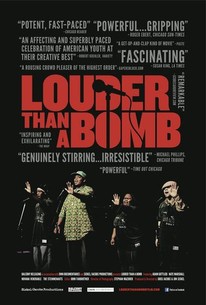 Louder Than A Bomb Photos

Louder Than a Bomb tells the story of four Chicago high school poetry teams as they prepare to compete in the world's largest youth slam. By turns hopeful and heartbreaking, the film captures the turbulent lives of these unforgettable kids, exploring the ways writing shapes their world, and vice versa. Louder Than a Bomb is not about "high school poetry" as we often think of it. It's about language as a joyful release, irrepressibly talented teenagers obsessed with making words dance. While the topics they tackle are often deeply personal, what they put into their poems-and what they get out of them-is universal: the defining work of finding one's voice. -- (C) Official Site

Lauren Iron
as The Steinmenauts

Jonathan "Freaky" Carillo
as The Steinmenauts

Kevin "KVO" Harris
as The Steinmenauts

Jesus "L3" Lark
as The Steinmenauts

Travell Williams
as The Steinmenauts

News & Interviews for Louder Than A Bomb

Critics Consensus: On Stranger Tides is Out to Sea

View All Louder Than A Bomb News

Critic Reviews for Louder Than A Bomb

"Louder Than a Bomb" has a lot in common with such documentaries as "Spellbound" and "Mad Hot Ballroom": charismatic, if obsessed, kids and nail-biting suspense.

Think of it as "Glee'' without music. Without a net, too.

Having a bad day? Then get yourself to Greg Jacobs and Jon Siskel's life-affirming documentary, immediately.

It should hit home with anyone whose experience of adolescence involved creativity, intellectual exploration, and getting to know and love people outside their immediate social circles.

The sheer breadth of talent is so astonishing, and the rhymes so clearly from the heart, that our spirits are inevitably lifted.

Who says poetry has to be dull?

LOUDER THAN A BOMB is an explosive look at capturing your dreams.

Poetry-as-savior may be eye-rolling. Their talent, however, is not.

The kids whom Jacobs and Siskel have chosen for us to watch are so enthralling, with such remarkable life stories, that their autobiographical poems have actual power.

It's about changing young lives, on giving them a taste for learning and a facility with language. In this post-literate era, how can you not cheer something like that?

Audience Reviews for Louder Than A Bomb

There are no featured audience reviews yet. Click the link below to see what others say about Louder Than A Bomb!

Louder Than A Bomb Quotes