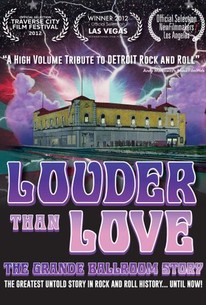 In the fall of 1966, Russ Gibb, a Detroit-area schoolteacher who also hosted teenage record hops, rented a shuttered dance hall in a run-down area of Detroit and began presenting psychedelic dance concerts in the style of the burgeoning Fillmore Auditorium in San Francisco. Gibb's venue, the Grande Ballroom, became the hub of Michigan's rock & roll scene and was home to some of the most powerful and exciting bands of the day, including the MC5, the Stooges, the Frost, the Rationals, the Third Power, SRC and many more; the Grande also played host to the top touring acts of the late 1960s, such as The Who (who gave the American premiere of their rock opera Tommy at the Grande), Led Zeppelin, Pink Floyd, Cream, Alice Cooper, the Jeff Beck Group, Big Brother and the Holding Company, and Jefferson Airplane. The Grande developed a reputation for discriminating audiences -- great bands would be given a hero's welcome, while acts that couldn't deliver on stage got the cold shoulder -- and became known to musicians as one of the best rock venues in America. Filmmaker Tony D'Annunzio offers a look at the people who made the Grande a legendary venue and a nexus of the Midwestern counterculture movement in the documentary Louder Than Love: The Grande Ballroom Story, which includes interviews with Alice Cooper, Roger Daltrey, Lemmy, Henry Rollins, and members of the MC5, Iggy and the Stooges, the Frost, the Rationals and many of the other leading Michigan acts featured in the movie.

Critic Reviews for Louder Than Love: The Grande Ballroom Story

There are no critic reviews yet for Louder Than Love: The Grande Ballroom Story. Keep checking Rotten Tomatoes for updates!

There are no featured reviews for Louder Than Love: The Grande Ballroom Story at this time.