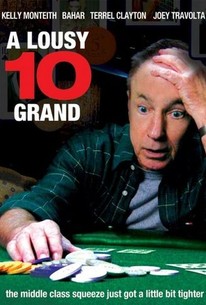 Bahar, Kelly Monteith, and Terrel Clayton co-star in the direct-to-video comedy A Lousy Ten Grand. The picture concerns a suburbanite, employed to design NASA toilets, who finds himself in hock to a bookie for ten grand. To free himself from the cage of debt, he devises a ploy to marry a wealthy middle eastern princess (Soomekh - thus granting her citizenship - in exchange for money. But problems arise when she unwittingly brings one complication after another to his life. Star and first time director Kelly Monteith helms.

Tim Thomerson
as Judge
View All

There are no critic reviews yet for A Lousy Ten Grand. Keep checking Rotten Tomatoes for updates!

There are no featured reviews for A Lousy Ten Grand at this time.