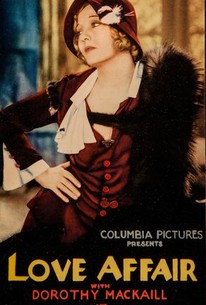 Based on a story by Ursula Parrott, this romantic drama from Columbia Pictures was one of Humphrey Bogart's first leading roles. Working-class pilot and mechanic Jim Leonard (Bogart) gives flying lessons to wealthy heiress Carol Owen (Dorothy Mackaill).They fall in love throughout the teaching process, but marriage seems impossible due to their differing social standings. Jim develops an airplane motor that could help him make some money, but he needs the upfront cash to finance it. Carol would be glad to help, but it turns out that she really had no money after all. She finds out that her father died broke and she has been supported by her financial advisor, Bruce Hardy (Hale Hamilton), who also wants to marry her. The conclusion involves a daring rescue and stunt flying sequence. Running just over an hour long, Love Affair was originally distributed in 1932 as a double-bill feature. ~ Andrea LeVasseur, Rovi

Harold Minjir
as Antone
View All

There are no critic reviews yet for Love Affair. Keep checking Rotten Tomatoes for updates!

There are no featured reviews for Love Affair at this time.