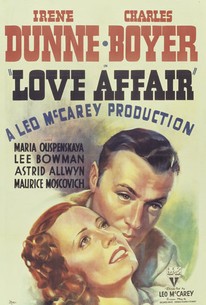 Leo McCarey's frequently-remade romantic comedy stars Charles Boyer and Irene Dunne, two cruise ship travelers who fall instantly in love despite the fact that both are already engaged to other people. After their trip, they resolve to meet six months later at the top of the Empire State Building, but their plans are disrupted by fate.

Scotty Beckett
as Boy on Ship

Bess Flowers
as Woman in Couple on Deck (uncredited)

Harold Miller
as Couple on Deck
View All

Meticulously directed by Leo McCarey and splendidly acted by Charles Boyer and Irene Dunne, this is the first and best screen version of the romantic drama that McCarey himself remade in 1957 with Cary Grant and Deborah Kerr, and Warren Beatty in 1994.

Kicks into a tearjerker drama in the third act.

Outstanding first version of An Affair to Remember. Superior on all counts.

Interesting to see how much change pre-marital relationships have changed from 1939 to now. This movie would appeal to the romantics among us.

Yeah yeah yeah. The original movie at the top of the Empire State Building which no one remembers because we have An Affair to Remember so many years later. Quaint but not memorable.

Original version of the old saw of star crossed lovers filmed most famously as An Affair to Remember. Not bad but missing the remake's lushness, musical score, although unfortunately Dunne sings, and strong chemistry of the leads. Boyer is very good here, Irene Dunne while certainly not bad and a sprightly comedienne was not as compelling or accesible in dramas as Deborah Kerr so you don't become quite as involved in the couple's story. Still a pleasant diversion.

It's easy to understand this film's influence on movies such as Sleepless in Seattle. My only real gripe: The ending's too abrupt. Fair warning: If you see this, have the tissues handy just in case.

This may be my favorite Irene Dunne. She's a smart actress, and that intelligence shines through here. Yeah, Charles Boyer never did much for me either, but he's good enough here, and it's Dunne's show anyway. I echo the sentiments of swedishsouffle: It is appalling that Irene Dunne never won an Oscar.