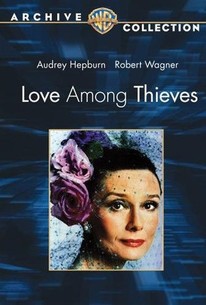 Made for TV on a feature-film budget, Love Among Thieves stars Audrey Hepburn and Robert Wagner--but fails to be worthy of the talents of either star. Ms. Hepburn plays a widowed baroness and classical pianist, who steals three Faberge eggs from a museum in order to ransom her kidnapped fiance. En route to the "drop", Audrey is rescued from a mysterious assailant (Jerry Orbach) by suave stranger Robert Wagner. Wagner proceeds to demonstrate that he's not all he seems by swiping the valuable jeweled eggs. The rest of the film is a maelstrom of double-crosses, clinches and hairbreadth escapes, all evidently intended to emulate Hepburn's 1963 theatrical feature Charade and Wagner's popular 1960s TV series It Takes a Thief.

Critic Reviews for Love Among Thieves

There are no critic reviews yet for Love Among Thieves. Keep checking Rotten Tomatoes for updates!

There are no featured reviews for Love Among Thieves at this time.