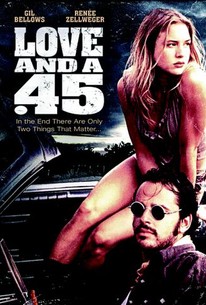 This action film has the feel of an old 1970's drive-in movie as it deals with the exploits of lovers on the run heading for the Mexican border. Watty-Watts believes himself to be an artist when it comes to executing robberies and demonstrates his art in the first scene. When Watty teams up with the crazed Billy Mack Black, a drugged out biker, his artistry fails and Billy fatally shoots the checkout girl which in turn, forces Watty to shoot him and run. Unfortunately, Billy didn't die and now is out for revenge. Watty, unknowing that his partner lives, gets his girlfriend Starlene and sets off across Texas for the Mexican border with Billy and the cops hot on their trail. The story makes many interesting detours before it comes to its inevitable conclusion.

Tommy LeBlanc
as Stipper
View All

Critic Reviews for Love and a .45

Captures that Texas Rockabilly Highway Outlaw spirit . . . a bit silly and lags in places, but [it] puts the fun back into antisocial and homicidal behavior

Audience Reviews for Love and a .45

When a convenience store robbery goes wrong, a professional thief and his true love head to Mexico pursued by the cops, a pair of drug addled hitmen and his psychotic ex-partner. Original, Love And A .45 is not. But although blatantly pillaging True Romance, Wild At Heart and Reservoir Dogs, it's written and directed with enough style and understanding of the genre that it has enough going for it to make it a pretty decent blood spattered road movie. Gil Bellows and a surprisingly hot Renee Zellweger make a likeable couple and they are ably supported by Rory Cochrane's manic turn as the scumbag who's the source of all their woes and Jeffrey (Reanimator) Combs is clearly enjoying himself as the obligatory wacky hitman. The one handicap is its insistence on having wacky characters shoot up drugs and wave guns around instead of any real plot development which means it has run out of steam by the rather anti-climactic ending. The low budget means it's not the measure of a Tarantino or Rodriguez, but it's still at least as good as the likes of Kalifornia and Red Rock West and a lot better than the wildly over-rated Natural Born Killers.

the hot empty wastes of the american west inexorably bring trouble to mind and so herein a lonesome tale of love and death for one trailerpark couple that simply are minding their own business...with a pair of .45's, welcome to america. gil bellows (what ever happened to him?) and renee zellweger dance with the devil in a cousin coda to "natural born killers".

Picture True Romance. Except not as good.