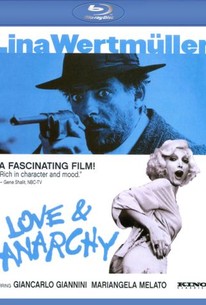 Originally released in Italy as Film d'Amore e d'Anarchia, Lina Wertmuller's Love and Anarchy is set in the fascist-dominated Italy of the 1930s. Giancarlo Giannini plays an idealistic farmer swept up in an anti-fascist underground movement. His first task as a member is to assassinate Mussolini (talk about your initiation stunts!) While preparing to carry out his assignment, Giannini takes up residence in a whorehouse run by Mariangela Melato, another anti-Mussolinite. Giannini's resolve to carry out the assassination is weakened by his love for one of Melato's prostitutes, as well as his own essentially gentle nature. Love and Anarchy was the first of Wertmuller's films to gain a U.S. release.

Critic Reviews for Love and Anarchy

There are no critic reviews yet for Love and Anarchy. Keep checking Rotten Tomatoes for updates!

Audience Reviews for Love and Anarchy

Powerful and Brutal!!! There is no place for love in a fascist regime. Love exists on the fringes of society ~ the countryside or the microcosm of a brothel. Oppression leads to retaliation, but even the final act of murder is rendered meaningless. A damning and emotional tragicomedy.