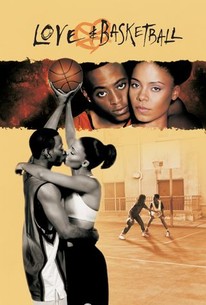 A young African-American couple navigates the tricky paths of romance and athletics in this drama. Quincy McCall (Omar Epps) and Monica Wright (Sanaa Lathan) grew up in the same neighborhood and have known each other since childhood. As they grow into adulthood, they fall in love, but they also share another all-consuming passion: basketball. They've followed the game all their lives and have no small amount of talent on the court. As Quincy and Monica struggle to make their relationship work, they follow separate career paths though high school and college basketball and, they hope, into stardom in big-league professional ball. Love and Basketball was the first feature film for writer/director Gina Prince-Bythewood, who previously helmed several comedy specials for Dave Chappelle. Spike Lee co-produced. ~ Mark Deming, Rovi

Terry Cummings
as Himself

Chick Hearn
as Himself

Stu Lantz
as Himself

Kara Brock
as College Girl No. 1

Aichi Ali
as College Girl No. 2

Dick Vitale
as Himself

Robin Roberts
as Herself

Trevor Wilson
as Himself

News & Interviews for Love and Basketball

View All Love and Basketball News

Critic Reviews for Love and Basketball

Too often dismissed as a soppy chick flick, the film is a drama that is clear-eyed and serious about female ambition and gender roles.

[It] wrestles with complicated issues of love and friendship, competitiveness and gender identity...

Told largely from the point of view of the woman, this career-versus-love story still develops the perspective of the man persuasively, as Sanaa Lathan and Omar Epps reveal their characters' motives with nuances of expression that transcend the dialogue.

The pic is so well directed and lead performance by Sanaa Lathan so charismatic that audiences will overlook the script's flaws and root for the central duo.

Stylishly shot and bursting with visual and sexual energy, this is confident black women's film-making and an eloquent tribute to the girl with the permanently grazed knees -- and about time too.

While full of great jump shots and on-court action, this "love story in four quarters" is first and foremost a romance.

A good basketball movie and a great love story.

This is a feminist, funny, and tender love story...

...a slow-moving yet pervasively entertaining drama...

The impressive cast includes Dennis Haysbert, Debbi Morgan, Regina Hall and Alfre Woodard, and Prince-Bythewood gets deep into the heartaches and triumphs of her main characters as time and events change and shape them

A great movie that showed us a bit of Black love, even with the things that went wrong in the movie. The characters were given an opportunity to grow.

Audience Reviews for Love and Basketball

This is one of my favorite movies! Sanaa Lathan & Omar Epps are excellent actors! This is a movie I could watch again & again. Beautiful story of two people who were meant to be together. So sweet & touching. :-)

The soul of the game portrayed through the eyes of two life long ambitious contemporaries...This was an extraordinary romance. see this it is a keeper of a chic flick! LOL!

I loved this movie.