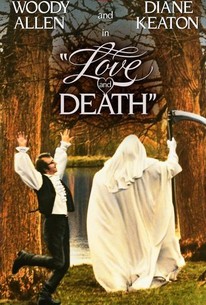 Critics Consensus: Woody Allen plunks his neurotic persona into a Tolstoy pastiche and yields one of his funniest films, brimming with slapstick ingenuity and a literary inquiry into subjects as momentous as Love and Death.

Critic Consensus: Woody Allen plunks his neurotic persona into a Tolstoy pastiche and yields one of his funniest films, brimming with slapstick ingenuity and a literary inquiry into subjects as momentous as Love and Death.

Woody Allen's Love and Death is purportedly a satire of all things Russian, from Leo Tolstoy and Fyodor Dostoyevsky novels to Sergei Eisenstein films, but it plays more like a spin on Bob Hope's Monsieur Beaucaire. Allen plays Boris, a 19th century Russian who falls in love with his distant (and married) cousin Sonja (Diane Keaton). Pressed into service with the Russian army during the war against Napoleon, Boris accidentally becomes a hero, then goes on to win a duel against a cuckolded husband (Harold Gould). He returns to Sonja, hoping to settle down on the Steppes somewhere, but Sonja has become fired up with patriotic fervor, insisting that Boris join a plot to kill Napoleon. Intellectual in-jokes abound in Love and Death, and other gags are basic Allen one-liners; for instance, after being congratulated for his lovemaking skills, Boris replies nonchalantly, "I practice a lot when I'm alone." The pseudo-Russian ambience of Love and Death is comically enhanced by the Sergey Prokofiev compositions on the musical track. ~ Hal Erickson, Rovi

Jacob Witkin
as Suskin
View All

News & Interviews for Love and Death

View All Love and Death News

Critic Reviews for Love and Death

Love and Death is an almost total treat.

Love and Death has been mapped out as a fully thought-through film. It's a lot more mature than the anything-goes style of earlier Allen movies like Bananas.

Besides being one of Woody's most consistently witty films, "Love and Death" marks a couple of other advances for Mr. Allen as a film maker and for Miss Keaton as a wickedly funny comedienne.

Suffice to say, it is as weird as it is funny.

Technically, the film is one of Allen's most accomplished, handsomely filmed in Hungary and France by Ghislain Cloquet, which helps make the hysterical anachronistic sight gags stand out even more.

The picture is packed front to back with many more cheery bon mots -- to say nothing of rollicking slapstick sequences, spoofy film homages and other modes of merriment guaranteed to keep viewers in perpetual guffaw.

Thus early Woody Allen film is quite a funny, often even poignant satire of Russian literature and Russian mores.

Stomps all over the games we play to pretend we're important

Absurd from start to finish, it may just be Allen's funniest film.

Audience Reviews for Love and Death

Let's start here: I have only a passing familiarity with the great Russian novelists, and I've never read War and Peace. However, in much the same way as Monty Python and the Holy Grail, you can enjoy the sheer silliness of the period spoof without being a medieval scholar - and if you have the specialized knowledge, you'll find it even funnier... a possibility that blows my mind, because I'm not exactly sure how this film _could_ be any funnier. Every line of dialogue is a punchline, and by cross-pollinating his stand-up and a satirical historical film, Allen has written the most hilarious script of his career. Throw in a classic performance from Diane Keaton - her chemistry with Allen is magnificent, again - and I knew before I even reached the end: this is my favourite piece by this director. Vintage Woody, and timeless; a must-see.

Possibly my new favorite Allen film. Filled with his signature blend of philoso-comedy, Allen pays tribute to Bergman and Dostoevsky in only the way he can. Full of amazing screwball dialog to boot.

In this early Allen effort his love for the Marx Bros. (particularly Groucho) is worn on his sleeve and the picture is very reminiscent of Mel Brooks' own Twelve Chairs. Throw in a couple of 70's style psuedo-intellectual "conversations" ("I'm overwhelming you with my superiorocity!") and you have a fun, silly, younger Allen, not so impressed with himself yet, easier to relate to. He never finds anyone as good as he to play himself, we know, and his infatuation w/Keaton allows her Dumont-like status beside him.

Love and Death is pretty much your standard Woody Allen fare from the 70s. It borrows heavily from Ingmar Bergman and the Marx Brothers and at times is downright hysterical but once its over I'm not going to really give it a second thought. I would've given this a 3 1/2 star rating if it wasn't for that last act, but since the only Russian novel I've ever read was Nabokov's Lolita most of the references were lost on me. The warm cockles line had me rolling almost as much as the scene where Sonja's first husband dies and the look on Diane Keaton's face during it. And speaking of which, Keaton was so goddamned cute. Worth it for her if nothing else even if her comic timing's not as good as Allen's...