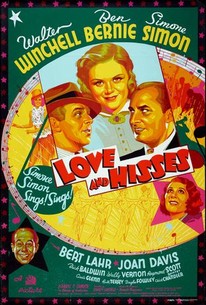 Before sitting down to watch Love and Hisses, it's important to know that columnist Walter Winchell and bandleader Ben Bernie were engaged in a phony but highly publicized feud in the late 1930s. For the purposes of this film, the source of the Winchell-Bernie contretemps is pretty nightclub singer Simone Simon. Secretly signing the girl to a contract, Bernie spreads rumors that the girl has no talent, knowing full well that his "friendly enemy" Winchell will then give her a huge build-up in his newspaper column. Upon finding out that he's been hoodwinked, Winchell gets even by having Bernie kidnapped by a gang of phony hoodlums. With all this going on, it's easy to forget that legendary Broadway clown Bert Lahr is also in Love and Hisses. ~ Hal Erickson, Rovi

Ben Bernie
as Himself

Harry Stubbs
as Producer
View All

Critic Reviews for Love and Hisses

After watching [Walter Winchell and Ben Bernie] in their latest engagement, one feels more convinced than ever that in wartime it's the noncombatants who do most of the suffering.

There are no featured reviews for Love and Hisses at this time.