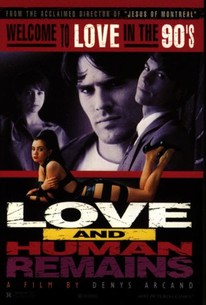 Based upon a play by screenwriter Brad Fraser, Unidentified Human Remains and the True Nature of Love, Denys Arcand's dark-humored drama Love and Human Remains follows the lives of a group of young Canadians, with a particular focus on their romantic and sexual experiences. The central characters are two roommates, David and Candy. The cynical, witty David is a former television actor turned waiter, the lonely, dissatisfied Candy a book critic; the two were formerly lovers, before David proclaimed his homosexuality. Candy is also questioning her sexuality, having begun a lesbian affair after wondering if her failures with men indicates she might be happier with a woman; meanwhile, David is becoming acquainted with Kane, a handsome, young busboy of uncertain sexuality who idolizes the older David. The other members of the ensemble are also somehow connected to the roommates, through friendship or romance, including Benita, a young dominatrix and part-time psychic, and Bernie, a boastful but insecure young businessman. The couplings and shifting relationships of these characters are intercut with the rather more severe story of a serial murderer who has been terrorizing the city's women, allowing Arcand to place the film's melodramatic elements in an edgier context. ~ Judd Blaise, Rovi

The result is kind of a mess, but an intriguing one; it's not a very good movie, but you don't stop watching it.

(Arcand) is a second-rank director, but a world-class doom-monger.

'm still working on figuring out "the moral of the story"

A one-of-a-kind film that takes a lot of courageous chances.

Awesome 90's movie, one of my favourites. Still love it to this day. It's about a group of people. A gay man, David (Thomas Gibson) and his flatmate and friend, Candy. Candy is treated badly by her boyfriend, so when a young lesbian woman falls in love with her, she flirts back, not realising the consequences of her actions. David, meanwhile, has attracted the attention of his sexually confused young employee, and encourages him. There's also a back story with a serial killer, but really it's surplus. This is just a great character study about real and flawed people who could be your neighbours or co workers. Never tire of this one.