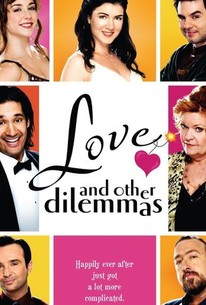 Love and Other Dilemmas Photos

On the day of Ginger Shapiro's wedding, the pregnant bride to be discovers that there is an element of truth to the rumors of a Shapiro family curse when she is robbed, kidnapped, and led to believe that her fiancée won't live to make it to the alter. Ginger is eight months pregnant, and still not yet married to the father of her child. But all hope isn't lost yet, because their wedding day has finally arrived and the loving couple is about to make their relationship official. Their day started with some playful pillow talk, and while Ginger and Henry's attempts at marriage had all been thwarted in the past, all signs indicate that today is the day they will make it to the Synagogue on time. The morning gets more eventful, however, as Ginger attempts to squeeze into her white dress, fend off labor until the vows have been exchanged, and fend off the robbers trying to break into her apartment. Meanwhile, Henry is having a hard time quitting gambling as promised. Despite the fact that he has made all of his payments on time and only owes local mobster Burt Ladro $500, the unforgiving gangster has decided to hold Ginger's wedding ring until he receives payment in full. Now, if Henry can't raise the cash to get the ring out of hock, any punishment Ladro could inflict in him would pale in comparison to the thrashing he would receive from his beloved Ginger.

Critic Reviews for Love and Other Dilemmas

There are no critic reviews yet for Love and Other Dilemmas. Keep checking Rotten Tomatoes for updates!

There are no featured reviews for Love and Other Dilemmas at this time.

Love and Other Dilemmas Quotes