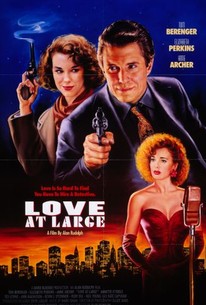 Paul Till
as McGraw Taxi Driver

Stephen Kimberley
as Man on Train

Shawnee Rad
as Valet
View All

Critic Reviews for Love at Large

Deliberately strange, to the degree where Love at Large refreshingly defies easy categorization, Rudolph's bizarre universe feels innovative even as it leads to an expected finale.

Love at Large probes the comic, obsessive and manipulative sides of love.

As with a lot of Rudolph films, this one seems a little too pleased with its quirkiness.

Audience Reviews for Love at Large

There are no featured audience reviews yet. Click the link below to see what others say about Love at Large!