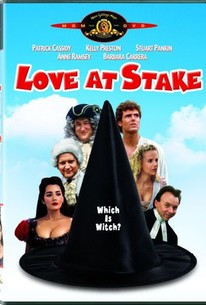 In this offbeat comedy, Mayor Upton (Dave Thomas) of Salem and his cohort Judge Samuel John (Stuart Pankin) set out to burn landowners at the stake as witches to gain their land. Miles (Patrick Cassidy) and Sarah Lee (Kelly Preston) are the young lovers caught up in the hysteria of the trials. Faith (Barbara Carrera) is the real witch who accuses Sarah Lee of being one in order to keep Miles for herself. Parson Babcock (Bud Cort) is the pompous preacher who is stricken blind by the wrangling witch. After a Thanksgiving feast with local Indians, the peace pipe is passed to the strains of The Kingmen's frat-rock anthem Louie, Louie. Dr. Joyce Brothers adds comedy relief with a cameo appearance.

Critic Reviews for Love at Stake

...a hopelessly frivolous waste of time.

Might wring a few chuckles out of you, but certainly not much more than a few.

Audience Reviews for Love at Stake

Borderline moronic comedy with many sight gags and puns that fall flat.