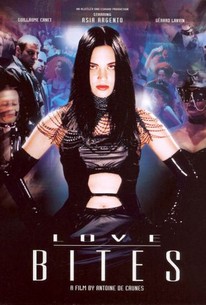 Former French television star Antoine de Caunes turns his sights on the horror genre in his first feature in this goth comedy about trendy nightlife and new-millennium vogue. Antoine (Guillaume Canet is a layabout slacker who lives in a lounge at a health club where a friend lets him stay. After outsmarting a bouncer at an exclusive club in town, he gets a tip from another friend, Etienne (Gerard Lanvin), about a new party in the know. When Antoine attempts getting into the swanky soiree, he claims his friend "Jordan" has invited him. Though he cannot describe his fake friend's features, the staff agrees to let him in. He is then hauled away to meet the party's wealthy host Von Bulow (played by Jean-Marie Winling), who is extremely enticed by the prospect of meeting "Jordan" as he hears he only lives by night. Von Bulow offers Antoine one million francs, half on the spot, if he can be led to Jordan. Antoine must then buy information with his new money, leading him on all-night, violent odyssey that goes further into dark territory. The film also features Asia Argento, Vincent Perez, and Gilbert Melki.

There are no critic reviews yet for Love Bites. Keep checking Rotten Tomatoes for updates!

There are no featured audience reviews yet. Click the link below to see what others say about Love Bites!