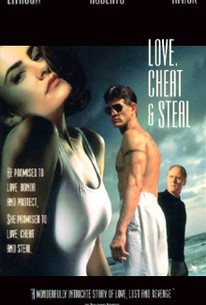 A woman's greed wreaks havoc on those in her life in this made-for-cable movie. Madchen Amick stars as Lauren Harrington, the seemingly perfect and beautiful wife of Paul (John Lithgow). What Paul doesn't know is that Lauren set up a former boyfriend (Eric Roberts) and sent him to jail as part of a million-dollar scheme -- and he's ready for some payback.

Cecile Krevoy
as Woman at Party

There are no critic reviews yet for Love, Cheat & Steal. Keep checking Rotten Tomatoes for updates!

A fairly average and formulaic heist film, Love, Cheat & Steal doesn't have any originality to it, but it still manages to deliver some entertaining thrills. When Reno learns of his wife's remarriage to a prominent banker he breaks out of prison to get his revenge, and to pull off one last score. The cast is rather interesting, and includes John Lithgow, Madchen Amick, and Eric Roberts. The performances are stereotypical, but it sort of works for the story that's being told. And, there are a few twists and turns that add some suspense to the film. Love, Cheat & Steal is a by the numbers film, but that's not all bad.